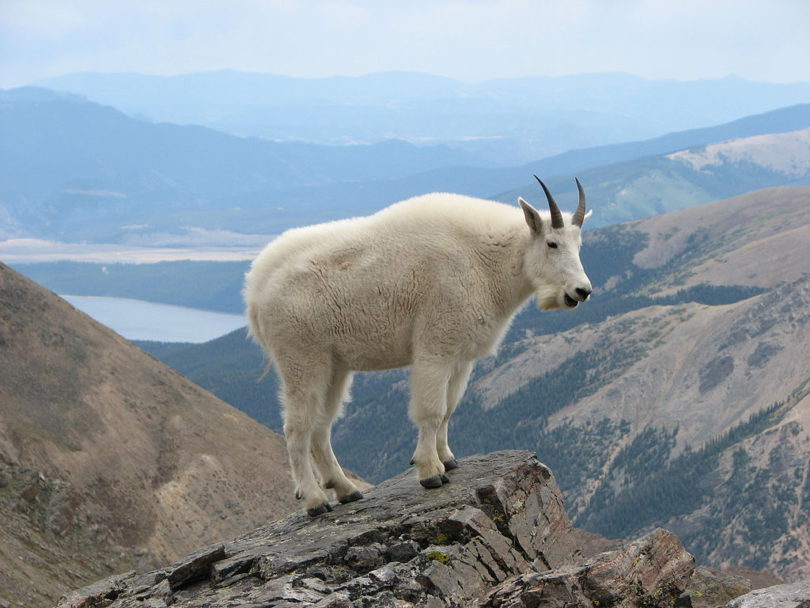 It’s a necessity for many animals to climb up surfaces to survive. Animals who can climb well can get to food sources that are harder for some animals to reach. They can also escape predators with ease. However, not all animals are able to climb as well as others. Some have evolved with characteristics that are conducive to climbing-related activities. With that in mind, here’s a look at some animals that do better at climbing than others. Many of them have unique physical features that keep them from slipping off of rocks. More importantly, these animals can easily climb such surfaces to keep them from being attacked by assorted predators that could try and kill them in the open.

The gecko is a lizard that has adhesive pads on its feet. These are covered in setae, a series of small hairs that will stick to other surfaces. The setae also use van der Waals forces to get onto these surfaces. That is, molecules between the feet and the rock surface will attract one another. This allows the gecko to hang onto many surfaces.

It can even stick to things while upside down. The gecko can do this regardless of how jagged or smooth a climbing surface might be. The gecko’s ability to climb rocks and other surfaces is so well-known that scientists are studying ways to design climbing pads that people can use for when they want to climb surfaces themselves.

The individual fingers and toes can also spread out quite well. They allow the gecko to maintain a stronger grip. The gecko doesn’t even have to bend its fingers or toes just to facilitate an appropriate grip.

The gekco can also keep its grip on a rock even as it falls in the event of an earthquake or other disaster that causes the rocks to fall off of a larger surface. The gecko can maintain its grip even when the surface it is on moves at 50 miles per hour.

While a snake may not have the appendages that are normally needed for climbing, it uses a unique form of motion to move around different rock surfaces. A snake will climb through a concertina-like series of movements. Parts of the snake’s body will stop and maintain a firm grip on a surface. Other parts will extend forward to climb up the rock.

Snakes are extremely flexible thanks to having hundreds of vertebrae. A snake can position its vertebrae to the point where it will keep a proper center of gravity. This allows the snake to stick onto a surface without potentially slipping off. More importantly, it will not slide off while trying to descent a larger rock.

Their scales are also tough enough to grip onto a surface. Snakes can also go over extremely sharp angles on a rock by moving along the base of the rock. A snake will progressively move over that angle after a short period of time.

Snakes tend to be rather slow when climbing. Still, they are capable of sticking to surfaces without slipping off too easily.

Also known as the Rocky Mountain goat, the mountain goat is only found in North America. It is a closer relative to antelope and cattle than it is to domestic goats.

Mountain goats’ feet are really well suited for climbing rocks. They have large hooves with inner pads that help maintain traction as their cloven hooves spread to maintain their grip. To add to this, they have sharp dewclaws on the tips of their feet that help keep them from slipping off the rocks.

Mountain goats tend to restrict their daily movements to their local vicinity, depending on a number of considerations. These include their foraging requirements, rest, body temperature regulation and, of course, protection from predators in the area. Seasonal movements are determined more by their nutritional requirements, mating seasons and changes in the local climate.

Mountain goats tend to move between high and low elevations throughout the year for different reasons. For example, in Spring, they head for forests closer to valley floors for mineral licks and better foraging.

The baboon is a primate that has a physical structure similar to what a human has. This gives it a better balance of weight, thus keeping the pressure of climbing from being too strong.

The flexible fingers and extended toes allow the baboon to keep its grip on rocky surfaces. These are also paired with sharp claws to get into smaller openings around even the flattest walls. Also, the long tail on the baboon’s body helps it to balance. It will be less likely to slip off of a rock thanks to this strong sense of balance.

The toes are also prehensile, thus giving the baboon the ability to grab onto even the smallest openings around a surface. It is believed that the baboon’s climbing skills and its ability to move up terrain was critical to the evolution of man being able to stand upright.

This is due to the baboon having to extend its body and stand upright while climbing. This feature of the baboon’s climbing skills is a big part of what allows it to climb and keep its balance running well.

Land snails, as opposed to snails that live in fresh or salt water, are terrific climbers. They have a strong muscular foot and produce a kind of mucus that enables them to move over rough surfaces without their bodies drying out.

A land snail’s muscular foot is covered in something called epithelial cilia. The snail is able to move due to muscle contractions down the underside of its muscular foot. You can see this pretty clearly if you see a snail climbing up a glass wall such as a window or aquarium wall.

The mucus snails produce also helps reduce friction and the chance of injury if the snail crawls over sharp objects. You can see where snails have been by the slimey trails they leave behind them when they go.

Snails seem to be able to climb on almost any surface and even remain stuck to a rock or plant upside down. The secret lies in its mucus which, in addition to reducing friction and making it possible to glide along almost any surface, is also pretty sticky and keeps the snail stuck to whatever it is climbing.

A spider’s legs allow it to climb up rocks quickly and carefully without slipping off. In addition to having a number of legs, each leg has an adhesive surface that allows it to stick to a rock.

Interesting thing about spiders and their legs: they use a form of hydraulic pressure to extend their legs and if their bodies are punctured, they lose the pressure they need and can’t extend their legs. The forces created by opposite legs will combine with this surface to allow the spider onto even the slickest rock surface. Most spiders are able to keep a good balance running. This skill is prominent among all types of spiders. Spiders will also keep at least 4 legs on a surface while walking or running to maintain a good grip on the surfaces they are running on.

However, spiders with longer legs that can exert more pressure will do a better job keeping a good grip on a surface than others. It is often easier for spiders to climb up walls if they have generated large-enough webs to maintain a good balance too. These webs can easily spread around the entire surface of a rock as well.

Spiders that tend to hunt rather than use webs to catch their prey have dense tufts of hairs between paired claws at the tips of their legs. These tufts help spiders maintain their grip on vertical surfaces that can be as smooth as glass walls and even walk upside down.

Frogs can climb onto rocks, trees and other surfaces with sharp inclines and rough surfaces. The frog’s toe pads contain nanopillars; these are small items that allow the frog to stick to a surface.

These consist of small hexagonal cells that are covered by assorted grooves. Each groove has plenty of mucus inside its body too. The small dimples on each surface will also add an extra sense of grip onto any surface.

The frog typically does best on damp rocks. While the frog can produce mucus on its pads, it doesn’t do so quickly or efficiently enough to stick onto dry rocks. The rate of mucus production is not as strong for the frog as it is for the gecko.

Also, frogs of all sizes can easily climb up rocks. The smaller ones tend to do better with getting into some of the smallest openings in a spot.

The koala is native to Australia and although it is sometimes called the “koala bear”, its closest genetic relative is actually the wombat. Koala’s tend to sleep for most of their days and are often see in trees.

Koalas have curved, sharp claws that are pretty well adapted for climbing trees. The large front paws have two opposable digits out of three and this helps them grip the trees they climb, including small branches. Friction ridges on their paws help them grip whatever they are climbing.

They seem cute and cuddly but koalas are really strong. They have strong skeletons as well as short, muscular bodies with long upper limbs that help them climb and grasp things above them.

To add to all of this, koalas’ thigh muscles attach to their shin bones lower than other animals and give them extra lower body strength to help support them while climbing.

These relatives of ant eaters have two varieties: two-toed and three-toed sloths. These animals live mainly in trees and move so slowly, the name “sloth” has become associated with slow-moving people.

Sloths spend so much time hanging upside down in trees that their fur has evolved to grow in the opposite direction to most other animals – it grows away from their extremities to provide some protection while they are hanging upside down. Because sloths move so slowly, they have also become hosts to entire ecosystems of non-parasitic insects and algae.

Another benefit of moving so slowly and spending most of their time in the trees is that sloths rarely attract the attention of predators. Their claws are so well adapted to holding on to branches that they often don’t even fall to the ground, even when shot by human hunters. In fact, sloths often remain anchored to tree branches even when they die from natural causes.

Sloths are so well adapted to living in trees that they usually eat, sleep and even give birth to their young while hanging upside down in trees.

You see them virtually anywhere but have you noticed how well these little rodents seem to be able to climb, well, pretty much anything?

Squirrels come in a variety of shapes and sizes. The smallest is between 2.8 and 3.9 inches and the largest, the Alpine marmot, is between 21 and 29 inches. They usually have slender bodies, bushy tails and large eyes which give them great vision. This is very useful for creatures that spend a lot of their time exposed to land and air predators.

Generally speaking, squirrels have longer back legs than front legs and each foot has four or fives toes, sometimes also a poorly developed thumb. Each toe has a soft pad underneath. They have versatile and strong claws for grasping and climbing. When they climb trees, it doesn’t even seem like they are actually climbing straight up.

Unlike most mammals, squirrels can descend a tree head-first. Their ankles can twist 180 degrees so their back feet actually face up the tree as they go down so they can maintain a firmer grasp of the surfaces they are on.