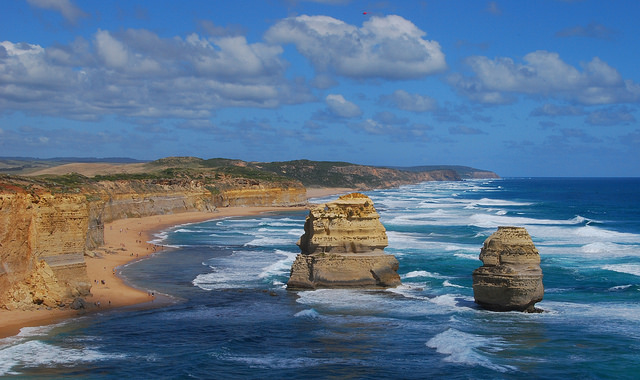 Relocating to Australia is all about trying out new opportunities. Sydney, Perth, Canberra, Melbourne, Brisbane are cities worth exploring for their attractions, housing system, nightlife, history, culture and more. Some would agree that Australia is very similar to the US 50 years ago, only it’s more opportunistic and filled with excitement.

Because of a lesser population density in most of the cities, the quality of life in Australia is astounding. The pollution levels are low and the infrastructure is modern and extremely efficient. The people are young, multicultural and unbiased. The average age rate is 37, so it’s an ideal place to enjoy your youth years or start a family.

Australia has it all, not to mention that it boasts with some of the most incredible coastal views in the whole world. Famous for its beaches, opera house and kangaroos, this country-continent is an acclaimed tourist destination as well. People no longer want to see Australia only for a couple of days or weeks, they want to live here, too. The nation has a lot more to offer than just hot weather, parties and surfing, so if you’re ready to make a change in your life and try something new, here are 10 reasons why should move to Australia.

Beyond the happy people and the spectacular beaches, Australia prides itself with an incomparable lifestyle. Because of the long summer days, the people are happier; they lead active, healthy lifestyles and they practice many sports too, like surfing for instance. Surfing is an incredibly popular activity, a national sport dedicated to locals and professionals alike. The Australia Open of Surfing is a very important event in the country; it is organized in Sydney on Manly Beach and the participants are internationally acclaimed surfers.

When summer ends and the weather conditions become crisp, the people relocate up north, literally. In autumn and winter, Aussies head to the mountains to keep surfing, only this time it’s a different type of boarding, namely snowboarding. Even though the Australian Alps are not that high (maximum peaks reach 2,000m), there are plenty of activities you can try out while here.

To put it simply, the Australian lifestyle is entertaining but also relaxing, exciting but also tranquil, challenging but also satisfying.

Australia’s economy keeps growing and growing for a few decades. Most people are middle-class, and there are plenty of job opportunities for everyone.

Unlike any other country in the world, Australia is incredibly meritocratic. The unemployment rates are low and everybody can find casual work in the big cities, even young ones and international students.

The minimum wage in Australia is the highest in the world, so even if you’re in your early 20s, you can still have a decent living.

The residents pride themselves with having a perfect work-lifestyle balance, and considering that the economy is pretty strong and the unemployment rate is somewhere at 5%, Australia is certainly an ideal place to find a job and relocate.

Australia’s history is centered on mass immigration, with people coming from all around the world; thus, we can say that the population is multicultural.

Nowadays, 1 in 4 Aussies was actually born in a different country and surprisingly, that number keeps growing. This indicates that you’ll never feel like an outsider on Aussie land. If you’re English is good, you’re positive and smart, and you have the right attitude, then you have plenty of chances to land a good job, make friends and feel at home.

Australia is a country with a unique blend of people. The original inhabitants were the Torres Strait Islanders and the Aboriginal people – they’re the custodians of one of the oldest ongoing cultural traditions on the world.

They’ve been populating Australia’s territory for nearly 50,000 years. Now speaking about the present, we must admit that Aussies are beautiful people; they exude happiness and friendliness, and they’re notorious for their easygoing nature and helpfulness. Many international celebrities were born and bred in Australia, such as Kylie Minogue, Nicole Kidman, Russell Crowe and others.

The defining feature of the people is not necessarily related to cultural diversity, but to the way they’re connected to each other.

The law says that Aussies are entitled to express their beliefs and culture, as well as take part freely in the lifestyle of the country.

Australia has an exact government system, probably one of the most stable and efficient in the world. Obligatory voting demands all Aussies to vote throughout public elections; this means that the Australian diplomatic system is a lot more genuine than in any other democratic countries across the globe.

The system is not just effective, but also engaging; out of 93% of the people who vote, 70% do it for pleasure. They want to vote because they see this task as a social duty.

Aussies don’t vote to make themselves heard, but also to make sure that their government is a genuine proof of public opinion.

Thousands of kilometers of smooth sand, sky-high waves and clear blue waters make Australia famous for its beaches. In total, Aussies enjoy 36,735 km of superb coastline and there are about 10,600 beaches that populate Australia’s territory, the most numerous in the whole world. So if you’re thinking of relocating someplace sunnier and warmer, Australia is the best place to consider.

Bondi Beach is the country’s most famous beaches. Positioned in Sydney, Bondi Beach also includes the famous Bondi Iceberg Club, which is a swim club known for its unbelievable sea-pool, directly linked to the ocean.

Some other famous beaches are Byron Bay (New South Wales) and the much-admired Whitehaven (Whitsundays) positioned in Australia’s tropical region, up north.

The Weather – Christmas in the summer, at the beach

It’s not every day that you get to spend Christmas swimming and surfing in the Pacific Ocean. Even though the geography and climate of the country is incredibly varied, Australia has a really warm climate, one of the most pleasant in the world.

As for the northern part of Australia, in the tropical and sub-tropical regions, minimum temperatures don’t go below 20 degrees.

This means a traditional Aussie Christmas in these regions often include seafood, BBQ dinners with the family, or trips to the beach.

Statistical data shows that Australia is one of the world’s best places to live. The country has been rated for 3 years in a row as an ideal place to work and live by the Organization for Economic Co-Operation & Development.

In addition, 84% of the population wouldn’t want to move to a different country; on average, their lifestyle and life quality are pretty good and they wouldn’t trade it for any other country across the globe.

If you’re considering moving to Australia, you should know that there’s a wide variety of visas that permit foreigners to enter the country. There are restrictions posed for every type; even though a tourist visa allows people to enter the country and travel freely, if you want to work, you need a work visa.

Once again, there are many types of working visas, including a holiday visa that allows young students with ages between 18 and 30 to live abroad and also get a job for a year.

Australia is famous for having one of the world’s most efficient healthcare systems. Apart from Medicare, which offers basic health coverage for all Aussies, there are many private healthcare practices as well.

On a global scale, Australia was the 7th country with the most efficient health system. As a percentage of the GDP, the healthcare investment is placed at approximately 8.9% per capita.

Considering that the life expectancy is 81 years, Australia’s universal health system is a winning model.

Unique Attractions And Places Of Interest

Australia has the best and most incredible attractions. Some are unique gems, while others are city milestones worth exploring at least once in a lifetime.

From cultural places like the Sydney Opera House and Canberra’s museums, to the Great Barrier Reef and Kakadu National Park, there’s no doubt that we’re talking about a country with precious landmarks. There’s so much more about Australia than meets the eye. Many people think of kangaroos when they first hear about it, others envision the superb Opera House or Nicole Kidman in a movie.

Regardless, if you’re planning to start a life in a different country, moving to Australia is a decision you’ll never regret.