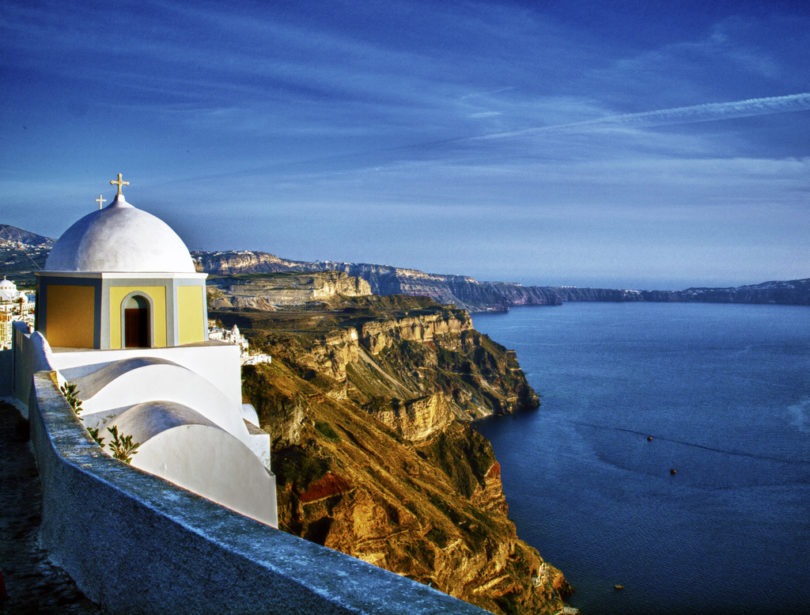 Greece’s official name is the Hellenic Republic. In ancient times this country was known as Hellas or Ellada. The name by which it is called today, comes from the Roman name Graecia.

The Greeks have a long history of influence on other civilizations’ language, culture, arts and industry.

With the blue Aegean Sea to its east, the Ionian Sea to its west, and the Mediterranean Sea to its south, Greece sits at the southern end of the Balkan Peninsula and enjoys a beautiful coastline as quick access to the ocean. No wonder, with its 8500 miles of coastline.

At 3200 square miles, Crete is the largest Greek island. Most tourists visit the northern part of Crete; however, it is along the southern edge of the island that beautiful, untouched beaches awaits you.

There is no location in Greece that is more than eighty-five miles from the water. That explains the Greek affinity for their boats. The Greeks have always loved the sea. Their very location in the Mediterranean made it possible for them to corner the shipping market. With more than 1,800 merchant ships in service, Greece has one of the largest fleets in the world; you may have heard of Aristotle Onassis and Stavros Niarchos, two of the most well known Greek shipping businessmen.

You can still see the Greek shipping and boating influence in the world today. Many personal boats are name after a figure from Greek mythology, such as Pegasus or Zephyr.

The capital of Greece, Athens, is one of the oldest cities in the world, with almost 3500 years of history.

You’ll likely want to see everything you can, including ancient Agora, the Plaka neighborhood, and the Acropolis.

You’ll also want to take a look at some schist – a metamorphic rock that makes up caves not only all over the world, but especially in Greece. The Cave of Schist, located in the Acropolis bedrock, has cave paintings that indicate the presence of human civilization some 7,000 years old.   You can see where the cave is on your tour of the Acropolis.

Your new computer arrives. You excitedly take it out of the box, peeling back layers of bubble wrap, and there it is, a thing of beauty – as large as a dinner plate and made of bronze.

It’s a bit corroded, but in every other way, it’s perfect. Especially considering it dates back to 205 B.C.  Sea explorer Jacques Cousteau called the Antikythera mechanism “more valuable than the Mona Lisa.” Since it’s discovery in 1900, it has been replicated more than any other device. There is even a Lego version!

Perhaps the oldest analog computer known to man, this device was used to predict the position of the stars and even predict astronomical events, such as eclipses. It showed the cycles of the Olympic Games, which occurred approximately every four years. It also calculated leap years and predicted the size of our galaxy.

The machine contains thirty bronze gears, many of which are now broken, and worked based on complex mathematical equations. The computer was quite accurate in its ability to predict solar and lunar events, including the wobbling of the moon as it orbited the Earth.

Once the device disappeared in a shipwreck, there was no other clock device like it until the fourteenth century.

The most popular cheese in Greece is actually  . . . Greek! At least, that’s what the European Union court decided in 2005.

Ever since then, the Greeks have been able to claim this cheese as their own trademark, no matter how many other milk-producing sheep or goats another nation may have for their cheese. No wonder there was debate on this. The word “feta” is not actually a Greek word, but instead comes from the Italian “fette,” which means, “slice of food.”

It took sixteen years to debate this issue, although feta cheese is mentioned as far back as Homer’s Odyssey. According to Greek mythology, the Cyclops Polyphemus collected sheep milk in skin bags. After a few days, he noticed the milk had solidified into a tasty solid consistency.

Today, feta is a white, salted curd cheese made in a variety of consistencies and flavors, from mild to sharp. It is a pickled cheese because it sits in its own brine for weeks or months. The next time you are enjoying feta on your salad or sandwich, send out a silent “opa!” for the Greeks and their victory.

Birders, take note! Your tour of Athens, and even of all of Greece, can be customized to viewing the birds you want to watch.

There is no better place for listening to warbling and locating the migrating birds by sight. Each year, over 100,000 birds from Europe and the Mediterranean visit Greece because of its perfect location and climate.

Be sure to include Lake Kerkini on your itinerary. This lake got its start as an artificial reservoir, and because of its marshes and mudflats, is now home to 300 bird species, who live here year around or make this a stopover on their migration. You’ll see peregrines, storks, egrets, black terns and spoonbills, just to name a few.

This is one of the premier birding sites in Greece, and it is not to be missed.

Ancient Greek theatre began as a festival in honor of the GreeK gods and goddesses, especially the god Dionysus.

Credited with developing what we now know as the forms of comedy and tragedy (known as goat-song), the Greeks developed these plotlines based on their purported experiences with mythological gods, who were capricious, and demanding.

Aeschylus, Euripides, and Sophocles are some of the most well known playwrights of tragedy. They introduced the structure of drama and multiple characters in a story. Aristophanes created comedies by imitating real life. Plays were meant to explore the meaning of life and even have a bit of fun with some of its ironies.

Many of the playwrights won awards, but you wouldn’t find anyone who won “Best Actress.” No women were allowed on stage – boys played all female roles.  All the actors wore masks anyway, so it was easier for an audience to suspend disbelief of character portrayal – and easier for the actors to make a caricature of the people they portrayed.

No other animal has been a part of Greek’s natural and cultural heritage as the Monk Seal. You’ll find the first references to these mammals in the Odyssey, and coins carrying the image have existed since 500 B.C.

Today, there are less than 600 Monk Seals left, making them the rarest pinniped in the world. These seals live around the Grecian islands and give birth in undersea caves, and they live on mollusks, eels, squid and octopuses.

The animals were hunted to near extinction during the Roman Empire and the Middle Ages, and now they are in danger of extinction once again from the industry by which the Greeks are best known: shipping.

Greece has created preservation areas for the seals, creating natural parks and controlling hunting. You may want to see the seals while you are in Greece, but many tours, especially scuba diving tours, can scare the seals away, so it’s likely you won’t get to see these magnificent creatures up close.

When was the last time your cat wanted to play in the water – or go fishing with you? “All the time,” would be your answer if you had an Aegean cat.

These cats are one of the oldest domesticated cats. Breeders began breeding them systematically in the 1990s, but before that, they were feral felines who liked to hang out around seaports. They have adapted well to domestic life, showing high intelligence and an ability to get their owner’s attention when they want something.

Originally from the Cycladic Islands in the Aegean Sea, these cats are muscular, medium- sized and have semi-long hairs. Their coats of semi-long hair are made up of two or three colors, one of which is always white and their eyes are green.

They are not officially recognized as a breed yet, but these national treasures make a great companion!

From island and shipping, to computers and cats, and migration to monk seals, The Republic of Greece offers something for everyone, just like it has for thousands of years. Now you know eight more things about Greece and its influence on many other cultures.