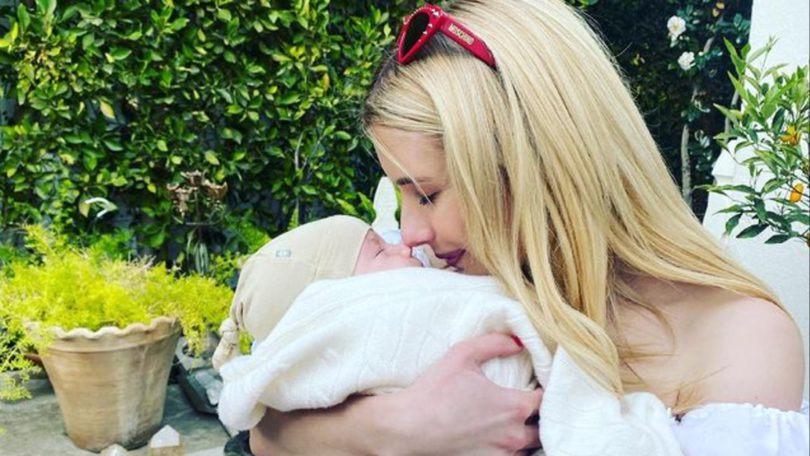 Right on New Year’s Eve, Julia Roberts’ niece gave birth to a boy named Rhodes. For Emma Roberts and her boyfriend Garrett Hedlund, the child became the firstborn. Earlier, the actress gave a frank interview, in which she admitted she could not get pregnant for a long time because of endometriosis. Roberts’ pregnancy was a double gift for her.

On September 2020, Rose announced her pregnancy by sharing a photo from the shoot for the magazine. 34-year-old British actor Kit Harington, who played Jon Snow in the HBO fantasy series Game of Thrones, became a father for the first time. His colleague and wife Rose Leslie gave birth to their first child, reports Page Six. The fact that the couple, who in September last year announced their upcoming replenishment, had a baby, became known purely by chance. On Tuesday, February 16, paparazzi accidentally caught Kit and Rose carrying a baby in a carrier. Smiling Harington held Leslie’s hand tightly, and in his other hand, he held a large bag from Sainsbury’s.

Later, an insider from the environment of the couple confirmed to the publication that the couple had a boy, and they are thrilled.

Leslie, best known for her role as Igrit in Game of Thrones, spoke to The Post in October about her upcoming motherhood.

I am very happy about this and look forward to meeting a new member of our family!

— said then the actress.

Keith and Rose got married in 2018 after six years of relationship. The wedding took place at an ancient castle in Scotland. Game Of Thrones’ actors Peter Dinklage, Maisie Williams, Sophie Turner and Emilia Clarke attended the celebration.

28-year-old model and brother of Donald Trump’s son-in-law Joshua Kushner became parents in mid-March. For both celebrities, the baby is the first. Joshua shared the good news, publishing a picture with the baby and writing “Welcome to this world.” Judging by the color of the baby’s hat, many thought that Carly and Joshua had a son.

And the fans were right. For several weeks, the young mother remained silent, and recently she published the first photo of the baby on her Instagram page with 9 million subscribers.

— the model signed the picture, immediately revealing the name and date of birth of her son. This post was the first on her blog since January.

We remind, the acquaintance of Karlie Kloss and Joshua Kushner took place in 2012 at the event of the Victoria’s Secret brand. The romance between them developed rapidly. Joshua was born into a very influential New York family: his father is billionaire Charles Kushner, who made a fortune in real estate and was once sentenced to two years in prison for tax manipulation, and his brother, media mogul Jared Kushner, is married to Donald Trump’s daughter, Ivanka Trump.

Joshua Kushner graduated from Harvard Business School. He created his first online business while still at university and invested all the proceeds in the Instagram platform.

Joshua is far from the fashion world. I like that with him. You can forget about shows, filming, casting and all this chaos for a while.

— said the supermodel in an interview with People.

The 40-year-old actor and his girlfriend Brenda Song had their first child in early April. And despite the fact it’s a boy, they called him a female name — Dakota — in honor of Culkin’s deceased sister. The couple claims they are “overjoyed.” They have a long way to baby: they drove a cat in a stroller, nursed other people’s children, brought fish, a parrot and a Shiba Inu. Culkin and Song, whom he met in 2017 while filming Changeland, prepared for a long time to become parents. Culkin noted in an interview that he was preparing to be a father since the beginning of 2019.

Younger sister of Kate Middleton gave birth to a daughter on March 15. The girl was named Grace Elizabeth Jane Matthews, after her famous aunt. The full name of the Duchess of Cambridge is Catherine Elizabeth Middleton. Their son Arthur, who was born in 2018, became an older brother.