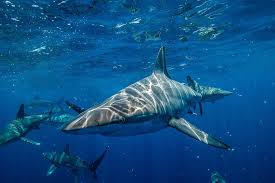 Yes, you heard it right, artists did bring out amazing creativity of art by painting the Indian Beach rock into “Jaws” Shark. Its said, for years, people have been scared by the Great White sharks, even before the Jaws. What to say about them? They are sharp, huge but fast and have the most amazing sharp teeth and no matter how much they hate the taste of humans, people around seem to be still scared of these huge moving bodies. So they are huge, they are fast but guess even after being so terrified this one America Graffiti artist named Jimmy Swift, did make the people get wow by making them click pictures with same at South Goa’s Palolem beach.

This is right, this one artist made them inspired to click some of the amazing pictures by a little of creativity. Just a triangular beach stone which was peeking out of the water and there Swift was, finding an opportunity to turn it into a piece of art and to entice the tourists and also the local for clicking pictures with same.

Talking about his inspiration, it was the Jaws movie poster which made him draw the people’s attention. The project was embarked in 2015 but guess the same was not as easy to complete as he thought to be.

Problems were encountered on the shore which was not a concern over the dryland paintings. Sometimes he got hit by waves, while other times sand blew into his face, even the tides were one hell of a fight together with his 3-dimensional canvas which in itself was trouble. Either way, this one masterpiece was completed just within an hour by the hard work of Swift.

With the post over this picture on the social media websites, there were 2000 likes received and for people who noticed this piece of art, well, they were drawn to take selfies with same. Jaws fans personalities are depicted by this every click. In some, people pretend to swim away terrified, while some mothers they just hold their daughters to the mouth of shark’s to make it picture-perfect. Either way, this one stone-turned shark, is one hell of a picture-perfect.

Playground, for people of all ages, the shark turned the beach into same with people all around posting pictures on Instagram. Comments like “So cool”, “Dope”, all make sure to give @art.sketchbook1, the words they deserve.

For the love people spread around this artwork, even Swift is inspired to provide proper maintenance to this loving shark. He tries maintaining the photo-genic qualities of the rock no matter how much the rock fades away the water-based spray. Either way, this one striking feature of this piece makes sure to ensure fun, creativeness, experience which can’t just be created by all and most importantly, can’t be maintained by all.

Are there any more stone-works made by Swift?

Well, the Shark isn’t the first. Even before he did make sure to amaze people by converting a huge rock to a white elephant in just 2 hours, displaying all the technical skills Swift got. But the same didn’t receive much of attention like this one marine picture-perfect shark.

The art is what brings all together and this is what made all from natives of the South Goa to the tourists around, to come and join the majestic beauty of this art and to soak in the sun while they enjoy it all.

Swift by his works did give people to embrace their fear and give their imagination a real shape. The shark did give people all around to enjoy and experience a perfect beach vacation. One can join on Instagram @jimmy Swift! to check out it other pieces of art.