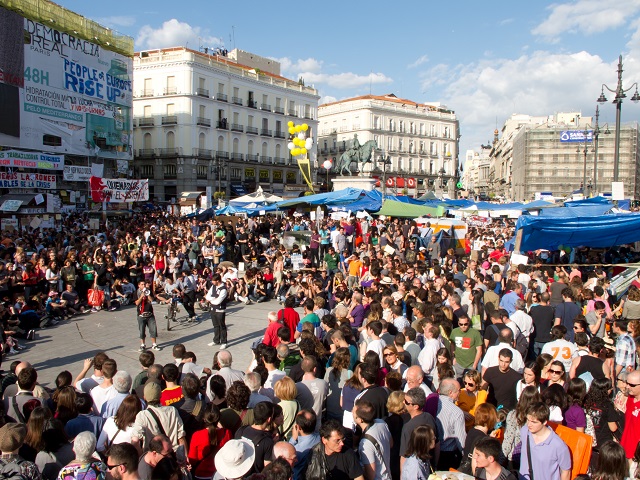 The unemployment rate in the United States is not that devastating anymore, reaching a 7.6% rate in March 2013. Unfortunately, we can’t say the same thing about Europe where the recession still maintains an incredibly high unemployment rate.

According to official data, the unemployment rate in Spain was somewhere at 26.3% at the end of 2013, while Greece’s rate was even higher than that, exceeding 26.4%.

It looks like the global economic growth is bouncing back, although there’s a lot of disappointment happening in the labor market. In 2010, there were 205 million unemployed people, and experts claim that the number will most likely increase in a few years. The labor markets of South America, Europe and Africa are still struggling to recover from the recession that hit in 2008. When sustained unemployment rates are too high (>10%), it’s extremely hard for a government to handle the situation. Back in 2009, 3.5% of Ireland’s GDP was spent on unemployment benefits; in that same year, the US only spent 0.9% on the exact same benefits. That being said, let’s have a closer look at 10 of the most unemployed countries in the world as of April 2013.

With a GDP per capita of $24,505.04 and a negative GDP growth rate of -6.38%, Greece’s devastating unemployment rate is 26.4%. The country started having problems in 2010, when it began asking for funding from the Eurozone. Many countries jumped in to save Greece, however none was successful. Those who wanted to help the nation started requiring major austerity measures, and this affected the economy even more. The official unemployment rate of 26.4% was established in 2012. 24.3% of Greece’s workforce is unemployed, a lot more than the rate in 2011, which was 17.7%.

Hundreds of thousands of Greeks lost their jobs between 2010 and 2012, and the country’s economy keeps shrinking. Apparently, Greece started selling some of its islands to save the economy. Potential investors are currently viewing the island of Rhodes, which has numerous additional isles that are for sale.

China and Russia are just some of the countries interested in buying Greece’s islands, and that’s because in spite of everything, it is still an ideal vacation spot for the summer.

What’s even worse, it looks like the highest rate of unemployment is among younger workers under 25 years old; the rate was 55% in 2013. Because people could find jobs, they decided to organize various protests across the country, some even left to try their luck overseas.

As opposite to numerous other nations with really high rates of unemployment, Spain has not yet received bailout funds. Nonetheless, it does feature a banking sector in need of billions of dollars to stay afloat. In 2012, there was an emergency fund set up to help Spain get back on its feet, and the money came entirely from Eurozone.

In 2008 and 2012, Spain’s financial debt doubled, and according to official data, things will get worse in the next couple of years.

Portugal’s current unemployment rate is somewhere at 17.5%. The country’s GDP per capita is $23,385 and the GDP growth rate is negative, -3.17%. Portugal has had such a high unemployment rate for several years now; in 2005 the rate was 8.5%, which was high enough compared to the average European unemployment rate (7.2%) at the time.

Due to rising debt and increased expenditures, Portugal’s financial and economic troubles have exacerbated. The gross domestic product per capita has shrunk in 4 of the past 5 years.

In 2012 it featured a decline of 3.2%, which was considered one of the highest out of all countries that the International Monetary Fund has measured.

In February 2013, the 14.6% unemployment rate was one of the highest ever recorded, and that marked a serious step back for the country. In addition, after gaining a GDP growth rate of 3.2% in 2011, the number dropped to 2% in 2012. Because of a limited demand for goods from other European countries, Slovakia will probably miss its budget shortfall target.

The country’s economy depends on export, but nobody is buying this will cause a lot of financial and economic problems for Slovakia.

Nonetheless, IMF thought that the efforts were taken to the extreme, and that the measures taken were a bit too much.

Ireland’s unemployment rate was estimated at 14.2% in 2013. The GDP per capita was $41,920 and the GDP growth was positive, 0.94%. The country has struggled a lot from a financial and economical point of view.

In 2010, the country got a bailout, which was meant to bring a lot of improvements. The European Union and the IMF provided the bailout in 2010, and it should have been used to cover its budget deficit.

The unemployment rate started to increase in the past 5 years; in 2012, it was already high enough (10.1%). Things got worse in 2013 when the rate reached 11.6%, and the people who are suffering the most as the young workers under 25 (38% don’t have jobs). As for Italy’s government debt, the amount totaled 127% of its national GDP in the years 2012; the percentage was the highest among all surveyed countries.

In spite of everything, economists are assuming that things are improving for Italy, and that the economy has high chances of stabilization in the next 3 to 4 years.

Bulgaria’s current GDP per capita is only $14,311. With an unemployment rate of 12.5%, it’s quite surprising that the GDP growth rate is positive, 0.78%. Generally speaking, countries with high unemployment rates have debts as well.

Bulgaria however, is the exception to the rule. The country’s debt rate is one of the lowest in the whole world, featuring 18.5% of its GDP in 2012 (the US’s rate for example, is 106.5%). In 2009, Bulgaria had an unemployment rate of 6.8%; the number increased to 12.3% in 2012. When unemployment is ever-present in a certain country, it usually means that the poverty rate is high.

Even though the country’s GDP dropped by an incredible 14.9%, the 2nd largest shrinkage in the world in 2009, Lithuania’s economy is trying to recover.

Things are looking pretty good, especially since the GDP has increased with various percentages every following year.

The IMF is estimating that Lithuania’s gross debt (which almost doubled in the years 2008-2009) will remain relative to the GDP in the upcoming years.

Some of its main economical issues were the banks, which lent too much money to the Greeks. To save the economy and stay afloat when the banking sector crashed, Cyprus got a bailout package from the IMF, as well as a bailout fund from the Eurozone.

Unfortunately, the country’s still facing banking problems and the whole situation is unlikely to get resolved in the next couple of years.