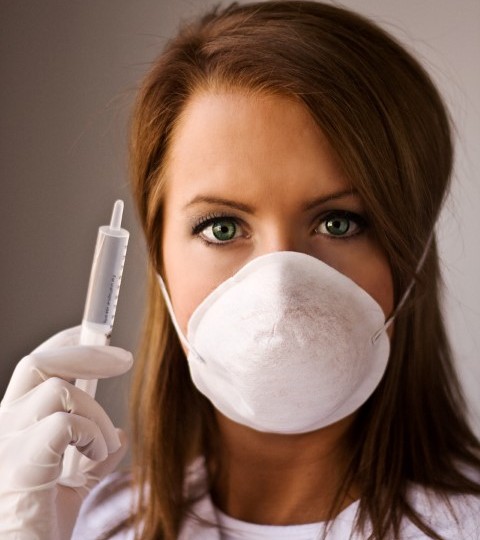 Some jobs are inevitably more dangerous than others. A nurse who works in a hospital is far more exposed to catching an infectious disease than an attorney who works all day in an office. Here are 10 of the world’s most hazardous jobs!

Working in constructions can be incredibly dangerous, and we’re not just referring to the possibility of various materials falling over you. Because the domain involves a lot of renovations and demolitions, workers are often exposed to all kinds of chemicals. They’re at risk of getting asbestosis (stiffening and scarring of the lungs), lung cancer and mesothelioma. Working in constructions is a lot safer now than it was 20 years ago, when certain products that contained asbestos were still being used. Unfortunately, a lot of people had to die for companies to stop using them.

Protective gear is paramount in constructions, and workers are compelled to wear a respirator when dealing with chalk and bleach. Unfortunately, not everyone adheres to these safety rules.

Whether we’re talking about doctors, nurses or caregivers, there’s no doubt that working in a hospital comes with serious risks. Studies have shown that many people that work in the healthcare industry are allergic to powders residue from latex gloves. This may cause asthma-like reactions that can lead to more severe side effects down the road. Latex gloves can’t be replaced with something else, so you can either deal with the risks or quit your job. Of course, this is not the only health problem that healthcare professional deal with. Handling needles, syringes, bloody clothes and all kinds of surgery instruments may put your health at risk, as well. Recent studies show that 70% of all nurses working in hospitals have stung themselves at least once with a used needle over the course of their careers. Such a minor accident may lead to the development of all kinds of diseases, one of the most serious of them all being AIDS.

In hospitals, the risk of getting exposed to infections and diseases is 96%. As for one’s chances of getting in contact with harmful contaminants, the risks are 69%.

Delivery truck drivers, railroad industry workers, those who unload and load merchandise are extremely exposed to developing all sorts of health issues. First of all, driving means that you’re sitting down for more than 8 hours a day. Your whole body becomes stiff, and in time this may lead to osteoporosis, disk hernia, sleep deprivation, obesity, heart attack, and more. The consequences of these health conditions are significant, one of the most important being road accidents that may involve the injury, or even death, of more than one individual. Another health concern of professional drivers and railroad industry workers has to do with diesel exhaust. A US study performed back in 2004, found an important connection between railroad workers and lung cancer rates after the industry gave up coal and adopted the diesel-powered engine in the 50s.

Because of extensive exposure to dust and other chemicals like airborne silica, the job of a miner is one of the most dangerous on the planet.

Coal miners have increased chances of developing pneumoconiosis, which is specific type of lung-scarring disease that forms due to years of direct contact with coal dust. Miners have high chances of dying from cave-ins, explosions and equipment accidents that are pervasive, as well as from fatal toxic conditions. Traumatic injury is still an important problem that ranges from trivial to fatal.

Main causes of deadly harm include entrapment, rock falls, mobile equipment accidents, fires, electrocution and falls from serious heights. In mining, noise is ever-present because it is generated by material handling, drilling, blasting, ventilation, and crushing.

Burning buildings feature all sorts of chemicals that are harmful to the human health.

Even though firefighters are compelled to wear special equipment, sometimes that may not be enough. Even though the breathing apparatus does an excellent job at keeping a firefighter safe, it’s not always worn in situations that are less critical. The level of exposure to asbestos and other toxic materials is incredibly high.

Recyclable material collectors don’t have the most sizeable salaries; and yet, they’re highly exposed to all sorts of unbelievable health risks.

Collecting trash comes with a wealth of drawbacks, and believe it or not, the fatality rate of this kind of job is pretty high. According to several studies performed on the matter, 36.4 per 100,000 employees are at risk of getting sick from chemicals emitted by trash deposits.

Collecting and dumping refuse, as well as recycling materials into sizeable trucks is not a pretty job, mainly because there a 97% chance of getting exposed to harmful contaminants. As for the risk of getting infected with a disease, the percentage drops to 63%.

Even though pilots are extremely well compensated for the innate responsibilities and dangers of their job, not even $1 million can prevent a misfortunate accident from happening.

The fatality rate for pilots is incredibly high – 56.1 per 100,000. Pilots spend a lot of time sitting, not to mention that they’re susceptible to radiation in proportion of 73%. Furthermore, their exposure to contaminants is 68%. Every work field comes with its own health risks. Before deciding to become a pilot, you should be aware of those risks in order to take the necessary precaution measures. The aviation industry is an incredibly complex field. Over the course of their careers, pilots are forced to deal with all sorts of health problems.

Cabin radiation is just one of those problems, and believe it or not it’s not the worst type. Many specialists agree that pilots deal with a lot of stress and anxiety, too.

They’re often forced to make decisions on the spot, especially when the lives of hundreds of people depend on their abilities to fly a plane.

A logging worker is considered America’s most hazardous jobs. According to various studies performed over the years, there are 128 deaths per 100,000 people who work in this industry.

As opposite to roofers and iron workers, loggers must deal with the world’s worst assassin – Mother Nature. In spite of meticulous safety standards, sometimes nobody can stop a tree from crushing you. Also, loggers work with equipment tools that are heavy and incredibly dangerous if not handled properly.

Recent numbers highlight that the industry is getting more and more dangerous, in spite of all the safety measures taken. From 2011 to 2012, the fatality rate went up by 19%.

Roofing is a type of job that doesn’t sound that dangerous. In fact, it is extremely challenging.

First of all, roofers must be in top shape to climb all the way to the top of a house or building, deal with unbearable weather conditions and still perform their jobs. When there’s a deadline they can’t miss, roofers must work in the most inhumane conditions. Whether it’s summer or winter, projects can’t get delayed, so the job is definitely meant for the toughest individuals out there.

In time, it will destroy your health because it is mainly centered on physical work. Exhaustion may lead to accidental falls, not to mention that workers get injured all the time. Unfortunately, many would rather keep working than stay home and not be able to provide for their families.

Apart from physical wounds, roofers are forced to deal with all sorts of chemicals as well. Roof tar for example, can create nausea, and in time the effects can lead to more serious lung diseases.

To begin with, they work in the street alongside cars hurtling past them as they go about their work. Street sweepers are often involved in collisions with careless drivers, victims of violent crime simply by being in such an exposed position at the wrong time and spend their days inhaling toxic carbon monoxide.

Fortunately street sweepers have some safety gear to make them more visible to motorists and many cities are starting to use mechanical street sweepers which means fewer unprotected humans working on the roads.

They work on high voltage powerlines daily. The most obvious danger is electrocution and, most likely, instant death if they touch an exposed cable. These technicians, also known as Linemen, have to wear specialized protective gear to protect themselves as they work.

Another danger which people often overlook is the danger of a powerline technician falling from the platforms he may be working on and being injured from or killed by the fall to the ground below.

Carpenters are responsible for beautiful woodwork but their job is no picnic.

Some of the hazards these hands-on creative professionals face include machine hazards (saws, drills and others); flying materials (often caused by those high-energy machines carpenters use); fires and explosions; electrocution; noise; vibrations from their machines; chemicals used in their work and all that dust.

Next time you buy a piece of wooden furniture, give some thought to the health hazards the carpenter endured to create that piece for you.

Bike couriers are often the fastest way to send a parcel from one part of a busy city to another.

They are treated as if they are invisible by inconsiderate drivers and yet, according to a Harvard Medical School study, are thirteen times more likely to be injured than the average person. Typical injuries may include being hit by cars driving through intersections, riding at high speed into car doors carelessly opened and landing on hard tarmac and falls caused by bike breakdowns.

Farming forms the foundation of our society and the source of most of our food supply.

Being a farmer may seem like a boring, safe occupation but it is anything but. Farmers face various dangers every day which include being mutilated by machinery such as combines and balers; crushed by massive livestock (often moving in herds). Don’t forget all those chemicals and pesticides farmers use to make sure their crops and livestock safely reach your table.

Farmers’ long hours lead to exhaustion and a greater risk of injuries too.

Last but not least, the job of a police officer is certainly one of the most dangerous in the world.

Law enforcement officers deal with all sorts of menaces on a daily basis; some can wreck their health while others can get them killed in the line of duty. Police offers wear equipment that weights up 20 pounds – this include heavy leather belts, ballistic vests, pepper sprays, batons, radios, handguns and handcuffs. This adds a lot of weight to their feet, back, hips and knees. When in pursuit of a suspect, they’re not allowed to take off any of the items mentioned. Apart from doing a lot of physical work, the risk of getting injured or even shot is extremely high.

Many police officers deal with a lot of stress as well. Some can’t cope with the thought of killing a perpetrator, so their issues are also psychological.

In time, the physical work performed, the tension accumulated and the metal concerns can destroy their general health.