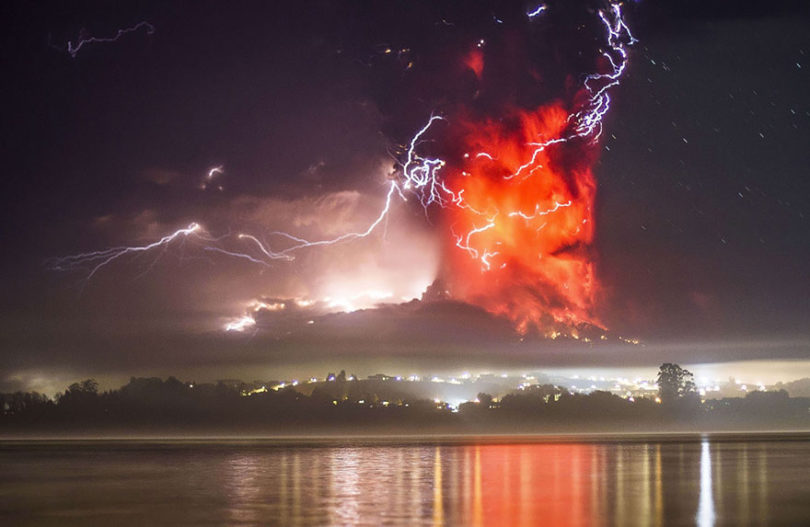 A hypercane is a theoretical, massive type of hurricane that could be exceptionally destructive on a global scale. The potential for the hypercane to create such tremendous destruction is strong as it is several times larger and stronger than a typical hurricane.

A hypercane is a type of hurricane that could occur if the temperature of the ocean reaches around 122 degrees Fahrenheit. This increase could occur as a result of an impact with an asteroid or from a supervolcanic eruption.

Professor Kerry Emanuel, a meteorology professor at MIT, theorized that a hypercane would extend high up into the Earth’s upper stratosphere where today’s hurricanes only extend to the lower stratosphere. Wind speeds could exceed 500 mph (800 km/h), compared to one of the most powerful hurricanes in human history, Typhoon Tip, which reached a mere 190 mph (or 305 km/h).

Given the extreme conditions required to create a hypercane, such a storm could cover most of North America and create storm surges of around 59 ft and 190 miles across. The water could remote hot for weeks, causing more hypercanes. The storm could even damage the Earth’s Ozone Layer.

The clathrate gun hypothesis states that methane could erupt from the seas and destroy the atmosphere. Specifically, the methane would come from clathrates.

These are ice-like bodies that are found at the bottom of the sea. These are kept stable in cold conditions or when the pressure levels in a spot are high.

If the methane was to ever be released from these clathrates then they could move into the atmosphere. This is several times more dangerous than typical greenhouse gases. Oxygen levels would be depleted, thus causing most lifeforms to die out. The polar ice caps would also melt while the seas will expand further.

This hypothesis could be noticed in the destruction of many lifeforms in the Permian period about 250 million years ago.

Fossils from this area suggest that a massive extinction took place around this time period with the clathrate gun being a possible hypothesis for the event.

There have been five ice ages in our planet’s history. An ice age is an extended period of very low, global temperatures and the popular illustration of this is global ice fields and snow.

Glaciers will expand as the Earth becomes colder and cover land which is currently inhabitable. Ice ages can potentially last for thousands of years at a time and can cover much of the planet.

This is often caused by the shifting of land masses and changes in atmospheric circulation patterns. The main threat with an ice age is that it would cause the planet’s surface to freeze. This would destroy much of humanity’s food sources and make parts of the planet uninhabitable.

In extreme cases, even the oceans would start to freeze, killing a potentially abundant source of food for humans: fish.

A flood basalt is a rather unique type of volcano eruption that covers large stretches of the ocean floor or dry land with basalt lava. There are many basalt lava flows that can be found all around the world with many flows being thousands of square miles in size.

A flood basalt eruption could cover massive bodies of land with molten lava. This could suffocate the land and severely limit human food sources and wipe out homes, cities even.

Flood basalt volcanism has been implicated with large scale or mass extinctions in the past, along with asteroid impacts and long-term climate changes.

Even though they are much larger, the basalt floods on Venus could help scientists better understand the phenomenon on Earth.

A solar flare is a sudden flash of brightness and release of energy from the Sun. It can often be followed by a coronal mass ejection which is a small part of the Sun itself being released out into space.

These solar flares can reach Earth within a day or two of occuring and will affect all of the Earth’s atmosphere’s layers. Solar flares can have a dramatic influence on local space and produce a stream of highly charged particles in solar winds known as a “solar proton event”.

Solar flares can knock out satellites, cause aircraft to suffer malfunctions and even known out much of human technology.

Solar flares can not only send humanity back to the Dark Ages in technology terms but the radion can also be deadly to humans.

Imagine a rock the size of a city hurtling into the Earth’s atmosphere and striking the surface of the planet. Billions of humans and other creatures are going to suddenly find themselves threatened with extinction.

Asteroids are large airless rocks that float around space and are often known to have trajectories that will cause them to move around in a particular orbit. In many cases an asteroid will get into a planet’s atmosphere and fly into the surface. This can cause a great deal of damage due to the intense impact that is caused and the large amount of heat that may be generated.

Asteroids are known to come in many sizes. However, just one, relatively small, asteroid could still cause significant damage to the Earth if it were to enter out atmosphere.

An asteroid could potentially be large enough to cause massive damage to the planet in the from of massive tidal waves, intense heat radiation and the disruption of the planet’s ice caps among other surfaces. Asteroids have fallen to Earth on a number of occasions in the past but there is always that threat of one asteroid potentially being large enough to where it could destroy the entire planet.

Fortunately, scientists can easily identify asteroids and project their trajectories as they are discovered. Even with this in mind, there is still that loose potential for an asteroid to have a trajectory that can come right into the Earth.

To many, declining sea levels are often a sign that it is getting warmer out and that there has not been all that much precipitation in an area. However, the truth about these changes is that they can cause dramatic disruptions in the world’s natural climate.

When sea levels decline, marine life will decline, thus causing concerns that the population and ecosystem will not be fed. Also, weather patterns may be heavily disrupted as the oceans will become more susceptible to serious weather conditions.

This decline is believed to be caused by global warming. The increase in the temperatures around the planet may potentially cause sea levels to decline as more water begins to evaporate.

A supervolcano is a type of volcano that is capable of generating an eruption that is several times larger than what a normal volcano can erupt. Specifically, it can create an eruption that creates at least 240 cubic miles of lava and other material.

A supervolcano is caused by a tremendous amount of magma rising from the mantle to the crust from a hotspot but being unable to break through until the pressure build-up is so great that the crust can’t contain it anymore and bursts.

The Yellowstone National Park is a possible site for a future supervolcano. It is overdue for an eruption and could, if it erupts as massively as many fear, destroy much of North America and plunge the planet into an ice age.

Black holes are known for being deadly as they can envelop any amount of mass that can come into a location. Black holes often stay in one place but there are also rogue black holes that can move around the universe.

Rogue black holes can move around because they are created by smaller black holes merging together. As they merge with one another, they will receive gravitational waves that will help boost the massive body to get in motion.

This motion will cause such black holes to move towards different bodies. If such a black hole were to ever move towards Earth then it would potentially destroy it.

As threatening as these can be, scientists do know how to identify such black holes. The challenge is that we wouldn’t be able to do much if a black hole started to head our way

Nothing, not even light, can escape a black hole once its gravitational fields seize that object. Earth and its inhabitants would be utterly destroyed.

A cosmic dust cloud is a massive body that features particles that are floating in space. These dust particles are relatively small in size but they can be especially dangerous.

They will cause solar light to scatter all around and cause the development of thermal emissions. This will result in infrared light signals flowing around the surface.

These particles will cause dramatic changes in the planet’s climate. This could potentially cause intense heat or significant damages to the ozone layer. Also, the planet could be at risk of developing a significant amount of ice building up all around the planet’s surfaces.

These threats can cause the entire planet to be destroyed as all lifeforms will be killed off by deadly cosmic rays or from dramatic shifts in the temperatures around the planet.