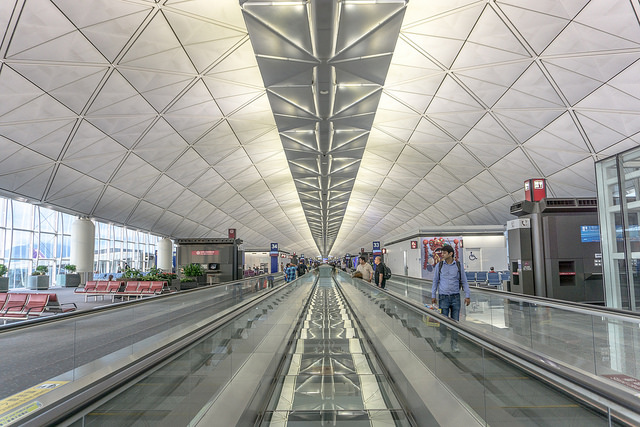 PEK is the second-busiest airport in the world. It’s also part of the reason that Beijing’s growth has expanded tremendously over the years. With upgraded infrastructure, Capital’s Terminal 3 was rated as the 10th-best terminal on the planet.

Amsterdam’s Schiphol Airport is one of the busiest airports in all of Europe, and one of he busiest in the world. It serves as the hub for KLM, Transavia, and Delta.

It originally opened in 1916, and is noted for its wide variety of activities to do while waiting for flights. It even has a library in which flyers can read before flying!

London Heathrow is the third-busiest airport in the world, and the largest of the five main airports that serve London. Its seven-year-old Terminal 5 building was dubbed  the best airport terminal in the world, according to Skytrax.

NGO was built on an artificial island in the middle of Ise Bay near the city of Nagoya. Central Japan International, a.k.a. Centrair — serves as a hub for Japan Airlines and ANA.

Centrair has been internationally renowned as the best regional airport in the world.

Zurich’s airport is just 8 miles away from the city’s center. The airport serves as the home for Swiss International Air Lines, as well as a hub that links Zurich with the rest of the country.

There are bicycle and inline-skate rentals and excursions to the Swiss Museum of Transport Lucerne- all available at the airport for those who have layovers.

Haneda is one of two major international airports that serve the Tokyo area. The airport is located a few miles away from the center of Tokyo. Haneda has proven to be a popular port of entry for business travelers and tourists alike. HND is known for it’s outstanding service and cleanliness.

HKG was built on an artificial island off the coast of Hong Kong. This airpor has become one of the most popular facilities in the world since it opened in 1998!

It is one of the busiest airports in Asia, because Hong Kong International serves as a major hub and home to Cathay Pacific, Hong Kong Airlines, and Dragonair.

Located just northeast of downtown Munich, MUC is one of the busiest airports in all of Europe and the second-busiest in Germany, following Frankfurt.

Munich serves as a hub for Air Berlin, Lufthansa, and Condor. It features airy glass-heavy architecture, which will blow you away. There is even a nearby visitor’s park filled with activities.

Incheon has been voted as the world’s second best airport. It is located on an island just outside of the South Korean capital, and serves as a home base to Korean Air. After its opening in 2001, it has since been considered the 24th busiest airport in the world. This airport boasts a variety of food options and a historical museum.

For the third year in a row, Changi takes the cake as the world’s best airport. It serves as home to Singapore Airlines, Silkair, and Tigerair, and is considered to be the 13th busiest airport in the world. This airport is best known for its astonishing architecture and luxurious facilities.