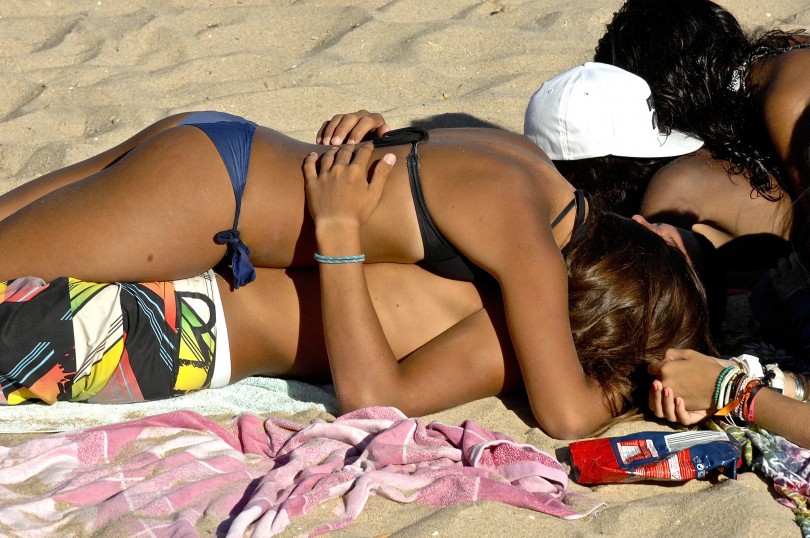 Love is a powerful emotion that can catch you off guard at any point. Young, old, single or divorced, we can all experience its magic. This emotion has led many people to do some very strange things, that if they had not been under the influence of love they would have never done it.

Bring out the tissues and read on, for the 10 most strangest things ever done out of love.

The heartache of having your loved one go through a physical illness is one of the worst things you can experience in a relationship. Though this is a story of success.

In 2009 Kyle Froelich was told by doctors that he should give up on finding a donor for his failing kidney. In the same year at a car show he met Chelsea Clair, who happened to have the same rare blood type and she offered Kyle her kidney to him on the same day they met.

After many hospital visits together, the young couple (only 22 and 19 years old at the time) fell in love. This unbelievable sign of love, is just one of a few on our list. If you want to push up the bar, what about giving a kidney to your partner’s brother or sister to save them. Would you do it?

Fake Your Own Death

Imagine being invited to a romantic date at your favorite restaurant, and when you reach the place instead of seeing your partner waiting for you, you see a crime scene, ambulances and drama happening everywhere. You will get interested and suddenly realize it’s your loved one on the floor, covered in blood. This incredibly strange scenario happened and its not the first or last time.

A great real life example of this happened when a young Russian businessman, Alexey Bykov, wanted to test his girlfriend’s love for him. He hired a stuntman, ambulance, camera men, and of course, fake blood. When his young girlfriend arrived at the scene, she was told that Bykov had died in the accident (he was lying on the floor covered in blood).

After many tears and painful screams, he moved from his position and showed it was all an act. The poor girl ran away, but ended up coming back and accepting Bykovs proposal. If you don’t think that’s strange, I’m not sure what is.

Most of these cases result in a proposal, and as your partner is still in shock from the incident they are likely to say yes. Good job.

This is probably one of the most extreme acts done out of love in the history of relationships. It’s basically taking the age old expression of married couples looking like each and putting a whole new twist on it.

One of the craziest, and most permanent things, that could be done out of love is in this story. In China, a widowed man convinced his new wife to undergo plastic surgery to look like his old one. When he lost his wife 3 years ago, Zhao Gang, 32, was determined to find a new wife that resembled his first love.

The strange thing about this story, is that Gang reportedly said that he wanted her to look like his old wife so that he could make up for all of the bad things he had done when she was alive. Strange, right?

This might not be on the extreme side of strange things that have been done for love, but it is equally as sentimental as the others. If you have ever been in a long distance relationship you will understand what it means to fly a 1000 miles for one date.

They say that distance makes the heart grow fonder, and it truly does! Some love crazed couples spend thousands of dollars each year to keep their romance alive in their long distance relationship. It isn’t surprising if you are having one of these relationships to fly out for one night date with your partner.

This type of behavior is not just present in long distance couples. The most loved up and spontaneous couples can often take a sudden flight to Paris, just to have an evening dinner under the Eifel Tower.

Being in love doesn’t just involve human to human relationships. It stretches way way beyond, to the weird and strange world of human pet bonds that have a special kind of love.

You would think this would be illegal, but there are some places where you can actually marry your pets. This year, Barbarella Buchner, 48, is celebrating 10years of being married to her TWO cats. After a horrible split from her last human partner in 2004, she took comfort in her feline friends and ended up marrying them. Apparently she has stated that they make her happier than any man. I guess we can all relate to that?

Buchner now lives in Lanzarote with Spider and Lugosi, and has even tattooed their names on her leg. The only question here is, who gets to share the bed and do cats get jealous?

Hire a Hitman to Shoot You

There are some very dramatic people in this world and these are the people that live up to the term ‘crime of passion’. Putting yourself in a vulnerable position is normally seen as a way to get your partner to look after you and be closer in the relationship.

In some incidents, this idea is taken to a whole other level of strangeness. For those extreme people who live for action, merely falling down is not a big enough fall to get a reaction. There have been cases when people have actually paid money for someone to shoot them infront of the partner so that they will get sympathy.

Just remember, if you are thinking of doing this, tell your hitman to aim for your arm and not your head.

A saying that has passed many peoples lips is ‘love is blind’. No matter who you are, what your circumstances and your age, you can fall in love at any time with anyone. This saying has definitely been proven by many couples that defy societal age norms when it comes to marriage.

This taboo subject is something that is more common than you think. Just search for the title online and you will see countless forums of people discussing and worrying about it. The funny thing is, it looks strange to people on the outside, and for the people experiencing it too.

The fact that people are willing to pass on their youth and settle down with someone who is retired and will probably not give them children, is a very strange thing to do for love.

When we fall madly in love we want to look the best for our partners. That’s where the problems start, especially when it comes to our own images. Couples that are crazy in love will do whatever they can to keep their partners satisfied, and if that means heading the gym everyday, then so be it.

From fruit shakes, to protein supplements, there are endless ways to keep your body in shape these days. And this isn’t a bad thing, if love has driven you to be healthier and stronger then it actually is a great thing. However, there is a fine line between caring for your body and obsession.

In some extreme cases, people have suffered from eating disorders and body dismorphia to get to their desired body shape, if love is the driving factor behind it, it is a very strange thing indeed.

So, 30 years ago before the internet was in everyone’s homes, there was no way to communicate immediately with the one you love. So what did people do? They wrote letters. Some people would not see each other for months on end and all they had to hold on to were letters every few weeks.

These days, it is much more convenient to use email, Skype or text messaging to keep in touch. Though there is unlimited amount of ways to communicate, there are some strange people out there that want to stick to the old school way of doing things and keep sending out letters.