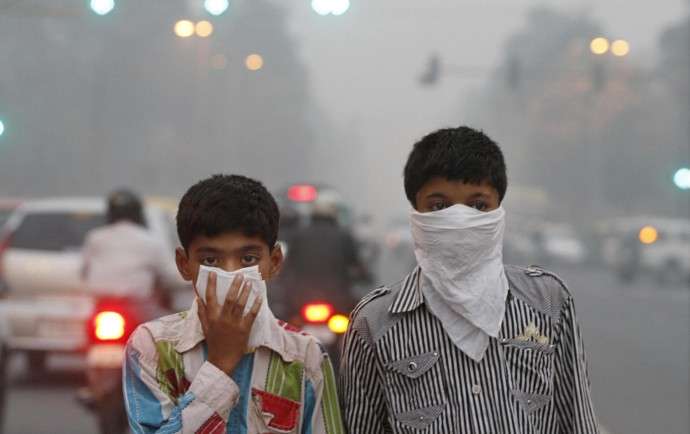 If you are living in modern suburbia you probably don’t have to think about the smell of your city. One of the fortunate things for many in the Western world is that we have clean streets, pollution control and modern technology that keeps our air smelling like roses. However, this is not the case all over the world, and some people actually struggle each day with the air they breathe. From eggy to just pure pollution, there are numerous problems for smelly cities.

In some cases its not a bad smell that’s the problem, you will never guess which town in the UK smells of chocolate! Find out more about the smelliest cities in the world by reading this top 10 list.

OK, so this is probably not what you would expect to be the first city to be mentioned for its smelliness. Rotorua has been branded one of the smelliest cities in the world because it has a close proximity to many geysers and hot springs. The city itself smells of rotten eggs, but many of the inhabitants have just gotten used to it. Luckily it is a natural odor, instead of like some of the cities in this list, where garbage and waste is the cause for its bad smells. Read on to find out more about some of the smelliest cities in the world.

This smelly city is also not what you expect. York is a beautiful country city, that happens to be next to the Nestle Rowntree chocolate factory. So instead of garbage and other nasty things we will mention on this list, here the city smells of chocolate!

For some people this is heaven on earth and many would consider moving here just to live in chocolate paradise. Though it has been reported by some of the residents that the constant sickly sweet smell has even turned some people off chocolate.

This list would not be complete without including Mumbai. The rich and vibrant city is visited by thousands of people each year and hosts millions of people as its inhabitants. On every street and every building you will come across some smell you never experienced before.

The upside for this city is that the bad smells are balanced with good. Just close your eyes and imagine a vast spice market, or rich curry house with overwhelming smells of Sag Paneer and Mango Lassies. Now that is something worth visiting for.

The Far East is not usually known for its cleanliness, and Bangkok is certainly one that is heard about for its unusual smells. From buses, to shops, to restaurants, the smell of the city reaches everywhere, including your nostrils.

If you are planning on visiting this beautiful country, just don’t be surprised when you land in the capital and not know what to do with yourself because of all the overwhelming garbage smells that are around. This is not the only Far East city on our list, as you probably already know.

Many tourists that go to visit this historic city don’t understand why there is such a stench, especially during the summer. The cause for Mombasa being on our smelliest city list is because the heat of the summer literally boils the terracotta buildings which causes it to let off bad smells.

The problem is that all of the building are made from this material, so even in your lovely hotel room you won’t be able to avoid the smells. Try visiting the city in winter, though you might still have problems, it will be much better than the summer months.

This Moroccan city is the home for all things to do with tanning. And not the sun kind of tanning that you first associate with the country. Fez has the largest tannery in the world, which means that everywhere you go in the city you will smell a cooked leather smell. Not the best for vegetarians.

If you are ok with that kind of smell you will also have to deal with dirty streets and unfriendly locals that would rather you not buy from them if you didn’t insist. It’s not all bad, many people put up with the smells of the city because it is a very beautiful place to visit.

We can’t create the world’s smelliest city list without mentioning Venice. Probably one of the most notoriously famous smelly city, but yet has a booming tourist industry that grows each year. The worst time of year to visit is during the summer, when it’s humid and the water is boiling with funky smells.

When you’ve dealt with the smells of the canals, you will notice all of the pigeons flying around. These vermin with wings are definitely not the most freshest of animals, and spoil the city with poop and feathers.

One of nature’s most beautiful locations, a deep red lagoon set in the Bolivian desert plains is a famous tourist attraction. Not only is it a magnificent place to visit, it is a sight that cannot be seen anywhere else in the world.

Dark brown volcanoes and flamingoes can be found here, as well as an overpowering Sulphur smell that hangs around. Volcanoes are the cause of this, and some people even take scarves with them to avoid breathing it in directly. Even with the smell, it’s not a site to miss.

As with any major city that has more than a few million citizens, it also has its smell problems. Pollution, cigarettes, and cheese all make the streets of Paris a playground of unusual smells. This is one of the reasons it attracts people to it (especially the cheese) but don’t be fooled that its romantic atmosphere is also coupled with romantic smells.

Many people complain of the smells in the train systems in Paris, which is a huge problem as it is the main way of transport within the city. The river that runs through it also adds to the cocktail of smells which frankly leaves you feeling damp.

The only South American country that made it onto our list is Bogota. The country itself is known for its drug and gang problems, but this city is actually one of the smelliest in the world. With the mix of car pollution and mafia body odor its no wonder people struggle for air here.

There is also a problem with altitude, over 8,612 feet above sea level, which makes breathing even harder than normal. Greenery surrounds the city and brings in unusual winds with smells of rain, jungle and damp. Overall the mixture leaves you running away.

As the beautiful capital of Scotland, it’s hard to hear that this magnificent city is also one of the smelliest in the world. If you look back at its history, you will hear that hundreds of years ago, the famous Princes Street Gardens used to be a moat where all of the city’s waste was dumped.

These days the smell is coming from the many distilleries that are still working in the city. For those of you who don’t know, a distillery smells of malt and yeast which is not the most pleasant smell. Recently odor reducing measures have been put in place to help the problem, but winds can still carry it in at times.

The second Indian city on the list is one of the smelliest and most polluted city in the world. If you’ve ever been to India, you would’ve had to pass through this city. Most people have Delhi as their first stop on their 6 month backpacking adventure, and it’s a bit of a shock when you get here.

Pollution, dysentery, poverty, mold, damp and dust are all the types of smells you will experience in Delhi. It’s been reported that the PM 2.5 levels are as high as 44,000 (to put it into perspective, 3,000 is dangerous).The problem is so bad that people are leaving the city in search for healthier places to live.