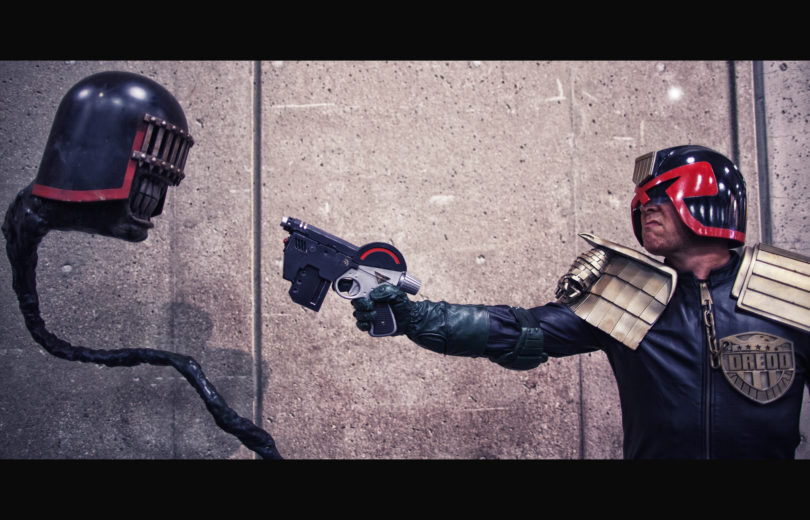 Both the advertising campaign promoting and the general hype surrounding this movie created some pretty high expectations. Jupiter Ascending was written and directed by Andy and Lana Wachowski who are famous for the highly successful Matrix Trilogy. This movie is a galactic epic with spectacular special effects and scenes and yet it only earned a mediocre rating.

Watching the movie you can’t help but feel that this movie should have been a two or three part epic in which the various sub-plots were more fleshed out. Jupiter Ascending feels like the Wachowskis took a trilogy and crammed it into about two hours. It is a fun movie to watch, visually rich but you can understand why it just didn’t meet those expectations.

Not to be confused with Sylvester Stallone’s 1995 cringe-worthy “Judge Dredd”, Dredd is closer to the mythology and Karl Urban is perfect for the role. Part of this movie was set in the inner city of Johannesburg, South Africa which is a great setting for a post-apocalyptic movie like this. Dredd’s pace is thrilling and the action scenes are very exciting.

Unfortunately the movie pretty much bombed at the Box Office and didn’t earn nearly enough. Don’t let that or the average critics’ rating dissuade you, it is a great action movie that is closer to a police/military movie than a sci-fi movie even though it blends both elements well.

Highlander was made in the mid-1980s and while it shows its age a little, it is a favorite for many. Christopher Lambert plays a Scotsman who discovers he is an immortal and must battle other immortals over the centuries. The movie reaches a tense conclusion in then-modern day New York when the character, MacLeod, takes on his great rival to fight for the ultimate prize.

You may be familiar with the sequels (not great) or the TV series the movie inspired but don’t miss this original story. It is exciting, raises some pretty interesting hypotheticals about people living amongst us and is a fun, alternative action movie.

Will Smith’s Hancock is a reluctant superhero (of sorts) in this movie. It takes the classic superhero movie and twists it around and inside out. Imagine if superheros live among us, perhaps even behave so badly the public despises them? Hancock begins as a sort of antihero and his transformation into an inspiration makes for a fun movie.

Hancock performed reasonably well at the Box Office and yet the critics didn’t agree. Will Smith plays a hero you can really empathize with and the movie may even leaving you wishing for a sequel.

The Secret Life of Walter Mitty

Why this movie didn’t win critics over is one of those questions that will never be adequately answered. Ben Stiller plays Walter Mitty, a LIFE employee, who takes on the challenge of finding a missing negative from a famous photographer for the LIFE’s final print issue. His active imagination and his adventures combine with the beautiful cinematography to give you an experience you will love.

This is a very human, fun movie with characters you can really feel for. This movie is worth watching just for the scenery and the story will warm your heart. Don’t be fooled by the poor reviews, watch it.

This was another Will Smith movie that also stars his son as his character’s son. The focus of the movie is on the younger character after their ship crashes on the Earth of the future and they are forced to survive. As sci-fi movies go, this one is at least worth watching on a weekend afternoon. It is entertaining, exciting and the effects are simple but good.

The central theme of this movie is fear and our response to fear. The movie bombed in the Box Office but ignore that and the terrible critics’ reviews. The story flows fairly well, keeps you interested and leaves you with a few things to think about.

Mars Needs Moms is a kiddies movie about a Martian campaign to abduct mothers from Earth and take them to Mars to help raise Martian children. It focuses on one little boy whose mother is one of those taken. She happens to be abducted right after he has an argument with her and he sets off to rescue her.

This is one of those animated movies that has as much to offer adults as it does kids. It has great perspectives on family and the special relationship between mothers and their children. Good for a family movie day, take something to dab your eyes.

Not to be confused with the Christian Bale movie, this is an animated movie based on Frank Miller’s Dark Knight graphic novels. It is based in some time in the near future when Bruce Wayne is older and retired from his days as the Batman, looking for meaning in his life. At the same time, dark forces and developments prompt his return as the Dark Knight to, once again, save Gotham.

Don’t let the fact that this is an animated movie dissuade you from watching. The themes are very adult (more in terms of violence and morality). It is an authentic Batman experience with more than a few twists. It will give you more insight into the “real” Batman than the flashy representations you may have seen.

This is a remake of Peter Weller’s 1987 RoboCop with a number of updates to the technologies and contexts that lead to a cybernetic policeman being created. As with the first movie, this version focuses on the tension between programming and human morality and personality and how Joel Kinnaman’s Alex Murphy finds a way to balance both imperatives.

If you have seen the original movie, the 2014 movie’s plot will be familiar. That said, don’t expect the same movie. Many of the action scenes are riveting and will keep you on the edge of your seat, literally.

This movie is a spin-off of a spin-off of the famous Cars movie. As with all Disney movies, this movie has something for kids and adults, alike. There are important lessons for kids to learn and dialogue that will keep adults giggling as only these movies can. Even if you haven’t watched the other movies this one is based on, watch this one anyway.

This movie wasn’t rated particularly well. That doesn’t matter, watch it with your kids, they’ll love it. You will too. Bring extra popcorn.

The Croods is another kids movie that seems to have slipped under the radar. It is really well done and focuses on a prehistoric family forced to abandon its cave and venture out into the world. Being a family movie about a family, it touches on the dynamics between family members and their fears and hopes. The focus is the daughter and her aspirations but not at the cost of the rest of the family.

Ultimately this movie comes down to how families can work together and move past their individual quirks to protect each other. Parents try to teach their kids these lessons every day and this movie manages to communicate these important messages through an entertaining, and exciting movie.

Olympus Has Fallen came out around the same time as another, similar, movie focused on an attack on the White House, “White House Down” (also pretty good). Olympus focuses on a former Secret Service agent who finds himself rushing to his President’s rescue when the White House is seized by North Koreans. The storyline is pretty basic but you don’t watch movies like this for the story; they are action movies.

TRON: Legacy is the very long-awaited sequel to the original TRON movie which was made in 1982. It focuses on the original character’s, Kevin Flynn’s, son who finds a way to enter the virtual world his father created around the same time his father’s (and his) company is about to launch its latest computer operating system that doesn’t do good things. The effects in this sequel are excellent and they take the original 1980s era effects much further.

This movie is a must-see if you are, in anyway, a TRON fan or like fancy bikes and grand action sequences. It is a good choice for slightly older kids and a real popcorn movie to watch on a big screen in a dark room.

Rise of the Guardians

Imagine the Tooth Fairy, Santa, the Easter Bunny, the Sandman and Jack Frost were all real and worked to protect kids from the darkness in the world. Well, this is the premise of this fun, animated movie. Actually there are two sub-plots in the movie. The first focuses on the growing threat to children and, indirectly, to the Guardians themselves and the second focuses on Jack Frost and a sort of personal journey he has to take.

This movie reminds me a little of After Earth. It also explores the theme of fear for kids and the power of belief in things you can’t always see. It is also a great story about the power of having people believe in you and how you can do amazing things if you realize that.

This kids’ movie almost slipped by unnoticed and it really shouldn’t have. It is a story about fairies (you know, the ones you don’t think are real) and the conflicts that take place just beyond our awareness. It is a story about magic, belief and taking on scary odds to make a difference in the world.

The animation in this movie is terrific, as is the soundtrack. It is a fun movie for boys and girls and will keep adults interested too. Don’t skip this one just because it seems like a silly kids movie. Like most animated movies, it really isn’t.

Dark City stars Rufus Sewell and Kiefer Sutherland in a thought-provoking speculative fiction drama. It is set in a gritty city where it always seems to be nighttime. Mysterious and threatening strangers are on the loose, doing strange things and Sewell’s character starts to notice that nothing is quite as it seems.

The movie has a great cast and explores similar themes to those tackled in the Matrix. It goes back to this philosophical hypothetical: how do you know you are not just a brain in a vat somewhere being feed impulses to make you think you are in your body, living your life? Not one for the kids but a fascinating one for adults who are inclined to think deep thoughts about the nature of reality.

Pan’s Labyrinth is a Mexican film, directed by Guillermo Del Toro. It tells the story of a a girl between two worlds, one realistic, and the other mystical. Ofelia, the girl, is in an abandoned labyrinth with a mysterious faun creature. The two interact, and the film depicts their relationship, with other magical creatures whom she meets on the way.

The director, Del Toro, stated that the film is supposed to be a parable, with a fairy tale influence. The idea for the film itself actually derived from Del Toro’s notebooks, filled with drawing and doodles of all kinds. Pan’s Labyrinth is an independent film, so it didn’t receive as much hype as it deserved.

The Science of Sleep

Another independent film, but in French, starring Gael Garcia Bernal, this film is one of those that will make you feel fuzzy inside. It falls under the category of surrealistic science fantasy comedy, and tells the story of a man whose vivid dreams interfere with his ability to interact with reality.

After his father’s death in Mexico, Stéphane Miroux, a timid and insecure young man, agrees to come to Paris to get closer to his widowed mother, Christine. He lands a boring job at a calendar-making firm, and falls in love with his neighbor, Stéphanie. Getting the girl is no cake walk for Stephane, so his natural coping mechanism is to go into his dream world.