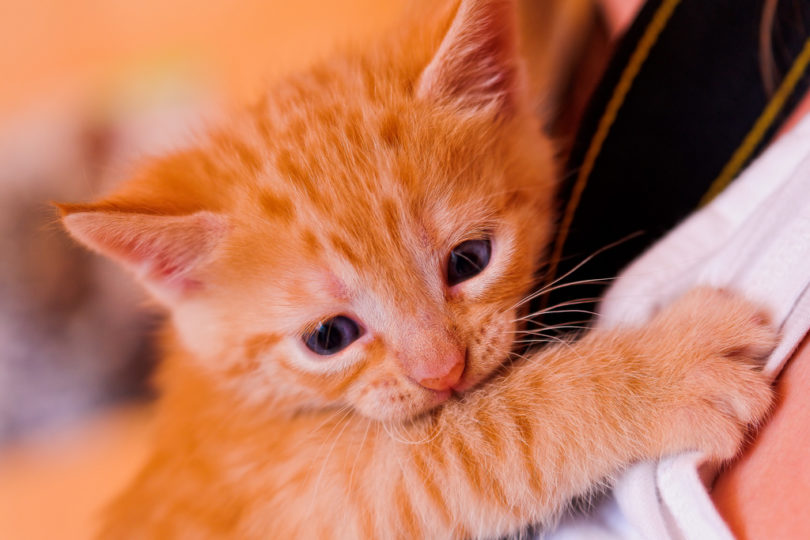 This guy looks a bit worried, but adorable. Those citrus-colored eyes give away his concern. His gray fluff, however, is telling of his adorableness. If you were his owner, how could you not attend to him? It’s like this cat is experiencing anxiety in lieu of you… how sweet.

“Sly” should be his name. Yep, that’s what I think we’ll call him. He’s looking at you like he’s going to pounce, but he’s way way way too tired to do anything. If you make any move, he might make one as well. Wait…no. He is just beginning to fall asleep for his 53471st nap of the day.

This little dude also exudes some exhaustion, but look at those green eyes! Oh, they say more than he sure can. “Hold me, love me, cuddle with me”, say his eyes. But the reality is that he is truly tired, and just wants to be left alone. He’s a Russian Blue, so it makes sense.

Okay, okay, this is a wild cat. But hey, he’s a cute one! Look at those pointed ears and steady glare…he looks like he’s about to attack, but he’s really just walking…toward his prey, which actually might be a really cute wild mouse somewhere. His markings are stunning, though.

If there was a cat picture equivalent to a human baby being nursed and/or cared for, this would be it. This ginger baby just wants love and affection and care. It doesn’t really matter from whom, because his little blue eyes just want to be held…don’t we all though?

He’s a chocolate kitty! Na-na-na-na! That ball in front of him is about to be demolished. You can tell that he’s playful, but calm at the same time (if that’s even possible for a kitten). His luscious chocolate fur reminds me of some kind of rich fudge, which totally adds to his sweetness.

This fluffball looks sad, as though he was just abandoned. Aww but look at the fur! This is the feline equivalent of a Pomeranian dog. He looks like a large cotton ball, but more feline-like. He also looks as though he could benefit from your love, so just give him a squeeze!

Rockabye kitty, in the treetop, when the wind blows, the cradle will rock…just kidding, dude. You’re on a couch. His fluffy ears show how alert he is, despite the fact that he’s asleep. Doesn’t an asleep kitty make you want to cuddle and sleep with it?

Little tiger kitty! Look at him yawn! This kitten knows what’s up, because he’s fierce but adorable. He run, chase, pounce, twist, and even shout! The look in his eyes says “I’m tired, but go away, this is my evil face”.

Mmmm that was delicious! This adorable tabby just had a treat, and as you can see to the left, his owner wasn’t so pleased with what he was doing before. We can’t seem to make out what that is though…MEOW.

Shnookums here looks shocked and uber-cute! Those green eyes are a giveaway of fear or maybe a form of surprise! This sweet baby is surprised because the dog is chasing his tail, and he has no idea what’s going on here.

Those blue eyes can be deceiving as heck. One minute he wants to cuddle and be your best friend, the next, he’s your worst enemy. What will it be, kitty? This is his fluffy and innocent look…the other look is not one you want to cross paths with.

Lots of fur AND curiosity…huh, Miko? I don’t think his name is really Miko, but he definitely looks like one. His ears are ones you just want to rub and give lots of kisses to. Look at the little light hairs coming out of his dark ears! Good job, nature.

This little dude just…wants…to…know. He holds all of the secrets of the universe, but won’t reveal any of them to you. His green eyes and little black beard is just darling, though. Even if you’re as curious as he is, you’ll never get to his level of cuteness.

The real-life Puss in Boots! He wanted to find a perfect hiding place from the dog, just because under the arm chair in the living room just wasn’t cutting it…so he managed! Now his owner is wondering where his other boot is…

He developed a love/hate relationship with his tie. His owner seemed to think that he’d like it, but those long whiskers are telling. They tell me that he hates it, but he’s coping. His pointy ears and big eyes are rather demonstrative of his suffering.

If anyone looks pissed, it’s this guy. His owner probably thought it was okay to take over his spot on the couch. Apparently, it’s far from okay, and now you can feel his wrath…maybe. Either that, or his wife just left him. His owner should probably just cuddle with him on that couch.

“Mom, is that you?” Pebbles just wants to know that she is loved. Her stripes tell more stories than you could ever dream of, and deep down, all she needs is validation and yes, more love.

The point ears and big eyes that this little guy boasts are more powerful than you think. He’s sitting next to his owner’s computer, thinking “Hmmmm, how can I get her to pay attention to me and get away from that stupid electronic thing”.

This sweet baby is walking the line…for real, though. He has perfectly triangular ears that hear much, much better than you do. Also, he likes to take walks with his siblings within the confines of the patio…awww man, just look at those fluffy paws!