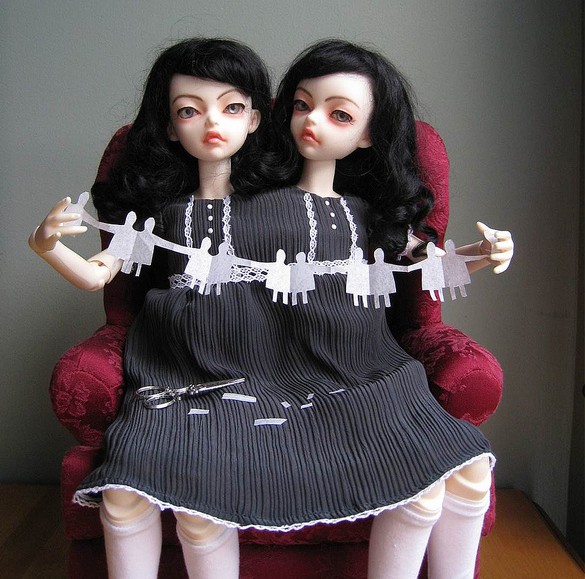 There’s no doubt about it:
Twins can be freaky, but it makes perfect sense as to why they’re so disturbingly alike: Not only do they share the same DNA, but they also tend to grow up surrounded by the same groups of people doing the same or similar activities. Because of this, there have been several cases of twin similarities that are creepier beyond description. Here are five examples of them:

Ursula and Sabina Eriksson, a pair of Swedish twins had no history of mental illness and lived perfectly normal and happy lives with their respective families. Then, one day, Ursula traveled from the U.S. to Ireland to visit her sister. What followed was a rampage that resulted in more than one traffic accident, one murder victim, and a cops that were completely baffled at the fact that the twins went insane simultaneously.

Some twins enjoy doing everything together, but at some point, you have to draw the line and give yourself some privacy, otherwise certain situations can get pretty awkward. Twin brothers Craig and Mark Sanders got engaged on the same day, had a joint ceremony, and settled down to live in houses next to one another…and get this: with a pair of twin sisters. One couple then went on to had identical twins of their own!

I’ll Do the Crime, If You Do the Time

Ronald Anderson was arrested in 1993 for assaulting his estranged wife. However,  Ronald Anderson had already been arrested for the same crime days earlier, and records indicated that he was currently serving his six-month sentence in prison. When authorities checked, he was still there.

A friend of Ronald’s made everything clear, though. Apparently, Ronald’s brother, Donald, had a tendency to go to jail for crimes that Ronald committed.

In total, Donald says he voluntarily served four sentences for Ronald, simply because he loved his brother and believed he wasn’t ready for prison life. Donald served four sentences for Ronald. But unfortunately for Donald, Ronald got himself arrested five days later for attempted murder, battery, and robbery and was therefore sentenced to 14 years inside, in addition a six month sentence he tried to skip. Investigators eventually figured out what was going on, and Donald still claims that he would do time in jail for his brother.

Jennifer and June Gibbons were 18 when they began to go on crime sprees together, and were declared psychopaths and sent to England’s most famous high-security hospital for the criminally insane. Before this, however, they had more experience doing other creepy things. As kids they were known as “the silent twins” because they refused to speak to anyone but each other, and even had their own secret language that no one else was able to understand.

Both twins refused to read or write at school, but at home, things were different.