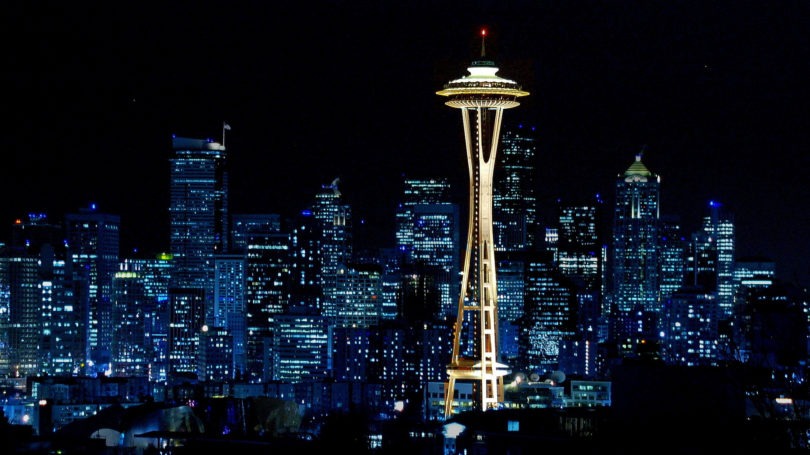 6 Things You didn’t Know About Seattle

When you think of Seattle, you may immediately think of Starbucks, Bill Gates, grunge music and a booming technology industry. While all of that makes up part of Seattle, there’s so much more that you don’t know about the city. Here are six things to add to your collection of interesting facts about Seattle.

Built in 1962, the Space Needle, at 605 feet tall, is still the tallest manmade structure in the western United States.

Intentionally built for the climate of the Pacific Northwest, the structure can handle earthquakes up to a 9.1 magnitude and winds up to two hundred miles per hour. You won’t want to be inside the needle during that kind of wind – the building is designed to sway one inch for every 10 mph of wind speed. That’s not much, but enough to make even the fearless get a little motion sick. The Needle shook so much one time in 2001 that you could have seen the water splash out of the toilet as the tower swayed in the wind.

However, the views from the Needle are nothing short of stunning, because you can see not only all of Seattle’s skyline and the harbor, but also the surrounding mountains. The Legacy Light, also called the Skybeam, was not always a part of the tower and not even part of the original design; an artist had drawn the light beam for a promotional poster, and the light was added to the tower later.

The light, which consists of 85 million candela, turned on infrequently because residents complain about light pollution, but you could have seen it for eleven days from September 11 -22, 2001 after the 9/11 attacks.

The Space Needle has seen a variety of celebrities in its restaurant. At the age of eleven Bill Gates won a dinner there because of his recitation of the Sermon on the Mount.

Today the Boeing company is synonymous with aircraft. Chances are that if you have ever flown, you flew in an aircraft designed by Boeing.

However, Boeing was not always an aircraft company. Boeing made boats, wooden ones because they purchased timberland and lumberyard mills throughout the Pacific Northwest. The company’s creator William E. Boeing fell in love with aviation, and he himself learned how to fly, although he crashed his first airplane. He decided that he could make his own replacement parts faster than he could order them and get them delivered. As soon as he put his airplane back together, the Boeing Aircraft Company was formed.

During World War I, Boeing produced airplanes for the United States government, and Boeing was able to employ 70,000 people. After the war, orders for airplanes came to a virtual standstill, so Boeing made bedroom furniture, cabinets, and wooden boats called Sea Sleds until their production of commercial and private aircraft took off, so to speak. Boeing’s first aircraft built after the war were used for mail delivery.

It was a Boeing aircraft that first flew over Mt. Ranier. Today, Boeing has taken the lead in the aviation and space industries. In 2001, Boeing moved its corporate headquarters out of Seattle, but you can still visit Boeing’s Museum of Flight in Seattle today.

If you are a reader, then Seattle is for you! Seattle is the most literate city in the United States, and more residents have college degrees than in any other US city.

In addition, more people per capita in Seattle have library cards. Organizations like Literacy Source, the Literacy Council of Seattle, and the Northwest Literacy Foundation commit to helping people become self-sufficient though literacy skills.

There’s a division in Seattle among people who embrace Amazon, which is housed here, and those who prefer books, the real ones you can hold in your hands. Many small bookstore owners blamed the demise of their book stores on the giant retailer’s success in selling books on the Internet.

It turns out that Amazon helped the community by providing tens of thousands of jobs, which pay well enough for discretionary spending. Ironically, the employees working at Amazon seem to prefer paper books, and they have buoyed the brick and mortar bookstores.

You’d think people turned to reading because of the rainfall driving them indoors, but that’s not necessarily the case. Read on!

Tell people that you’re going to Seattle, and they will remind you to pack your Wellies and take your umbrella.

Seattle’s annual rainfall is less than that of Houston, Chicago or New York City.  It doesn’t even rain every day. In fact, Seattle receives approximately 822 hours of rain a year out of a possible 8,765 hours. It only rains nine percent of the time in Seattle. You can expect light drizzle from October to March, and from then on it’s sunny and even cloudless in April through September.

There’s really not even much snow; Seattle gets about eight days of snow a year. This even climate is due to Seattle’s proximity to the temperate rainforests of the Pacific Northwest.

The weather is predictable, and perfect for those who like consistency. Put those Wellies away! You’re going to need your sunglasses. In fact, Seattle sells the most sunglasses per capita in the United States.

Seattle has the greatest number of floating homes in the United States — 500 of them. The idea of living in a floating home or houseboat in Seattle evokes images of the iconic and quaint – and the movie Sleepless in Seattle.

Be aware that a floating home in Seattle can cost as much as $700 square foot! Houseboats are far less expensive, at half the cost. It’s all in how you want to spend your money. If you purchase a houseboat, in addition to the purchase price, you will pay sales tax and a license fee, which can be a big chunk of change upfront, unless you negotiate it into the sales price.

You still have to pay a mooring charge for your houseboat, but the good news is that you can take it with you when you relocate. Floating homes, on the other hand, have the added expense of property taxes. They are attached to the land and have permanent utility connections.

They are a good value because Seattle has capped the number of floating homes permitted. With demand high, the floating homes will continue to hold and exceed their value.

Not sure? Take a Seattle Floating Homes Tour on Lake Union to see if floating homes fit your style!

Most visitors to Seattle make their way to Pike Place Market. The market first opened in 1907, and it has operated continuously since then. No other farmers’ market in the United States can make that claim.

The Pike Place Market met the community’s need for fresh food, and even during the Depression, business at the market boomed. By the 1960s, the market had fallen into a dilapidated state and was going to be razed, but a group rallied to preserve the marketplace. From its original four blocks, the market now spans nine acres.

Today the market is well known for a variety of fresh foods, crafts, and collectibles. There are buskers (street performers), dining options, and people watching to keep you entertained. It’s also home to the Pike Place Fish Market, where employees throw whole salmon through the air instead of passing them. The market became well known for its Fish Philosophy, which is a training product to teach other businesses how to have fun at work.

Did you know that the Pike Place Market is also well-known for its ghosts? Princess Angeline, daughter of Chief Seattle, is said to haunt the market because it is built on top of her homestead. She is not alone in the haunting, though. There are many other ghosts that wander the marketplace, fight in the stores, or just watch the daily goings-on.

When you visit, take time to talk to some of the shopkeepers. They will have some incredible stories to tell you!

Armed with interesting facts about Seattle, you can be just as literate and informed as any Seattle resident.

Seattle offers an amazing array of the well-engineered, the unusual and the beautiful. It is a city of highly educated people who have created an urban nirvana for those wanting to live in the Pacific Northwest. Of course, Amazon got its start here, as did Bill Gates. Starbucks opened its first store at the Pike Place Market, and Seattle at one time was the epicenter of the grunge movement.