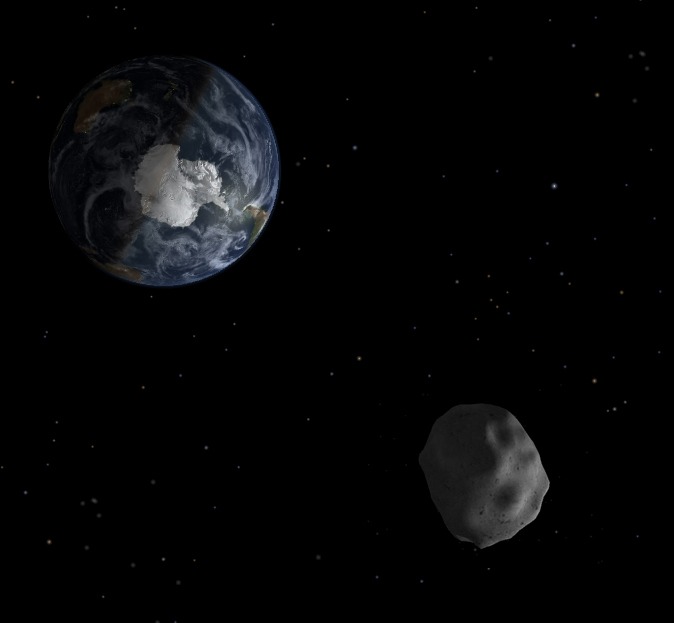 Our planet seems to be sturdy and large enough to withstand the impact of large objects that enter our atmosphere but can we? Some large celestial objects have come very close to entering our atmosphere, sometimes as close as thousands of miles from us.

Some of these asteroids are even large enough cause real damage to the planet itself. The odds are you probably did not hear much of anything about these near-misses that came by our planet. Still, the fact that these asteroids came so close to our planet is still a cause for concern. It’s a sign that we are often in danger of many different bodies coming close to us.

A new comet was discover in the early part of 2015 and it came rather close to Earth. 2015 CO13 was found to be about 5.16 million kilometers away from the planet when it passed by. This measurement is based on the distance between the center of the earth and the center of the asteroid. The measurement standard is also known as the close approach distance. It is a standard that is used by NASA to identify how far certain asteroids and other moving objects may be from the planet.

NASA is still looking for more information on this massive asteroid but it is known that it is about 45 to 95 meters in diameter. It is also moving through the sky at a speed of about 19.1 kilometers per second. This measurement is known as its relative velocity.

The asteroid is not expected to make its way close to the earth’s atmosphere any time soon and it is uncertain if any new information about the asteroid will be discovered any time soon. NASA estimates that May 2015 would be the best possible time for the asteroid to try and come back around the planet. It would be at least two years before it came close to Earth’s orbit again.

Even then, the potential for the asteroid to get near the planet is minimal. Only half of its orbit matches up with the orbit of Mars.

In January 2015, a massive rock called 2004 BL86 passed pretty close to Earth. It was about 745,000 miles away from the planet. The asteroid is about one-third of a mile in width and is one of the closest asteroids to have come by in recent time.

The asteroid is so large that it has its own moon. This moon is estimated to be about 230 feet wide. It is unclear as to how that moon is able to maintain its orbit or even if the moon is made out of the same materials that the larger asteroid is made of.

The rock has moved around the earth for a while now. However, studies on its trajectory and velocity have found that this rock is not going to be coming close to our planet for another two hundred years or so. The asteroid has been tracked by NASA for nearly a decade and is considered to be the closest asteroid that has come by the planet’s surface in quite some time.

It will take about 1.84 years for the asteroid to complete its orbit.

2012 DA14 was tracked by an observatory in Australia in February 2013. The asteroid came as close as roughly 17,150 miles away from the earth’s surface.

Studies show that there is a 0.033% chance of the asteroid making its way into the planet’s atmosphere at some point between the years 2026 and 2069. This estimate suggests that it is unlikely that its orbit could end up influencing the planet in any way.

Astronomers are still hoping to take a closer look at this asteroid over time to see how it acts and if it will pose an increased risk to our planet.

In October 2013, astronomers in Ukraine discovered an asteroid that had never been seen before. This came as the asteroid was very close to the planet’s atmosphere. The path of the asteroid placed it near the Earth’s orbit but it is unclear how the orbit of the asteroid is shaped. Still, it was close enough to merit a legitimate cause for concern.

2013 TV135 is about 1,480 feet in diameter and managed to come nearly four million miles away from Earth. Interestingly enough, this asteroid was reported to have come close to the Earth about a month prior before it was officially discovered to be floating around the planet.

Still, the massive size of the asteroid could make it very dangerous in the event that it were to ever come anywhere near the earth’s orbit in the future.

2014 RC passed right along Earth in September 2014. This asteroid was discovered about a week before it actually moved past the planet. The asteroid appears to be about 60 feet in diameter.

This measurement was gathered by a full analysis of how bright the asteroid is when viewed through a proper telescope. The asteroid’s overall orbit appears to be closer to Mars’ orbit, thus meaning that the odds of the asteroid moving into Mars would be stronger than it would be to land on Earth. Even with that, those odds are extremely scarce.

The asteroid appears to be related to a rock that passed over parts of Russia in 2013. However, it appears to be slightly larger in size than those fragments.

It got to about 25,000 miles away from the earth at its closest point. This is about one-tenth of the distance from our planet to the moon. However, the object was small enough to where it would be next to impossible for the naked it to see it without assistance.

This asteroid has an orbital period of about one and a half years. It also takes about 15.8 seconds to rotate. This makes it the fastest-rotating asteroid that NASA has ever discovered.

2014 XL7 also passed near Earth in September 2014. This asteroid was listed on the Sentry Risk Table, a listing of asteroids that could potentially impact Earth in the near hundred years or so. 2014 XL7 was determined to be the most threatening asteroid on the list as of the end of 2014. However, further research has determined that the asteroid may not be as dangerous as expected.

Even with this in mind, the asteroid is still massive. It is about 170 to 380 meters in diameter. Further studying is needed to get a closer estimate. Also, the asteroid was about 24.1 million miles away from Earth when it came by in September 2014. The asteroid has an orbital period of about 2.13 years

The asteroid is expected to come close to Earth next in 2065. Even with that in mind, the potential for the asteroid to actually enter the Earth’s surface is not all that great. There is a 1 in 137,000 chance that the asteroid will impact the planet in 2076.

The asteroid has a massive body that could make a dramatic impact if it were to land on Earth. The impact that would be caused by it would be at least twice the impact of what a hydrogen bomb would cause if it exploded.

The asteroid also has an orbit that passes near to Venus and Mars. As a result, there is a potential that its orbit may change due to the gravitational forces exerted by those planets and shift this asteroid closer to an intercept with Earth.

The most dangerous known asteroid according to the Sentry Risk Table is one that passed near the Earth less than ten years ago. 2007 VE191 got to around 1.19 miles from the Earth in November 2007.

The asteroid is expected to be close to 46 million miles away around the end of 2015. It is so dangerous because it was estimated to have a 1 in 63,000 chance of impacting the planet in November. This is in accordance with approximations on the orbit of the asteroid.

The orbit of this asteroid does not appear to be all that steady. It has an orbital period of about 2.64 years but its pattern is inconsistent based on numerous reports. In addition, the asteroid has been reported to be between 50 and 110 meters in diameter.

The asteroid is actually expected to be even closer to Earth in 2026. Estimates suggest that it will come close to the planet in November of that year. Its speed would also be very fast as it would travel at about 20.25 kilometers per second if it entered the atmosphere.

The asteroid already has a velocity of close to seventeen kilometers per second while in orbit.