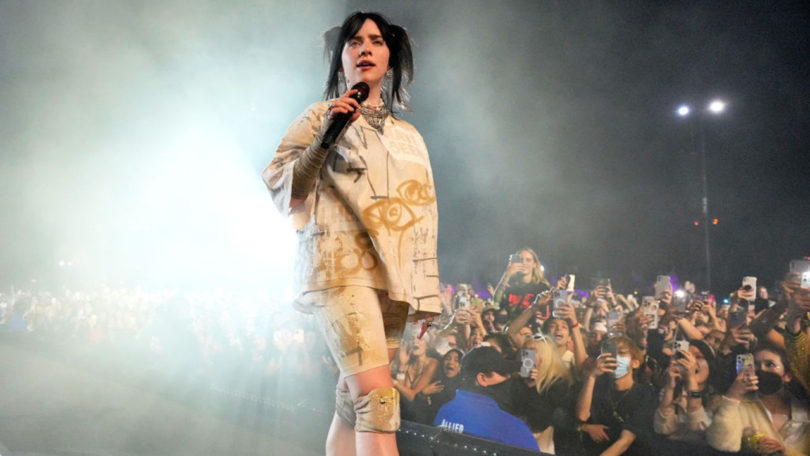 Billie Eilish’s “Getting Older” Coachella performance on April 23 caused her to fall and fall on her face. After that, she could not stop laughing. The following section contains further details.

This year at Coachella, Billie Eilish was utterly smitten.

According to reports, the 20 years singer-songwriter dropped to the ground during her final show of the second weekend of the renowned California music festival on April 23. Billie’s performance of her hit song “Getting Older” was about to begin when she slipped and fell flat on her face.

In a video shared on Twitter, Billie can be heard yelling, “I just ate s—-.” “Ouch! You guys, in this situation, I ate my ass up.”

Aside from some minor ego damage, the “bad guy” vocalist was uninjured. But, he said, “I stumbled over a f*king fire like thing,” when asked how he got hurt.

After the song was over, Billie explained what had transpired in great detail. A video of her detailing the scenario was posted on TMZ. She insisted that it was “completely dark.” “Is that a rectangle you see? What the hell is this? Everything in me shrieked with a shriek of displeasure as I walked out the door. and slammed into me.”

On the other hand, until the day of her performance, Billie had concealed a secret from the public: she would be joined by an unexpected guest. Billie was interested in the seat next to her that had become available the day after playing an instrumental version of her hit “Your Power” with her brother Finneas O’Connell.

“That is amazing! It appears like there is a free seat. What is the point of this, exactly?” Then, Billie asks the audience a sly question if the reports are believed. Hayley Williams, lead singer of pop band Paramore, rushed on stage and embraced Billie as she accepted the prize.

As they were led to their seats, Williams cried, “Aw, it is my first time at Coachella, aw.” “I appreciate you taking the time to share it with me. It is a sickening prank!”

Their minds were blown when they sang “Misery Business,” a hit song by Paramore but no longer performed, as a duet for Billie.

As Hayley went off the stage, Billie screamed, “Oh our f**king God!” “That is the best thing I have ever had the pleasure of experiencing. There is no mistaking this for a prank.”

Hayley rejoined Billie later to play “Happier Than Ever” with her later in the evening, and things could get even better.

During the festival’s first weekend, Billie and Hayley were joined onstage by Gorillaz’s Damon Albarn and Posdnuos from De-La-Soul. “Feel Good Inc.” by Gorillaz was performed by the band in a high-energy manner.