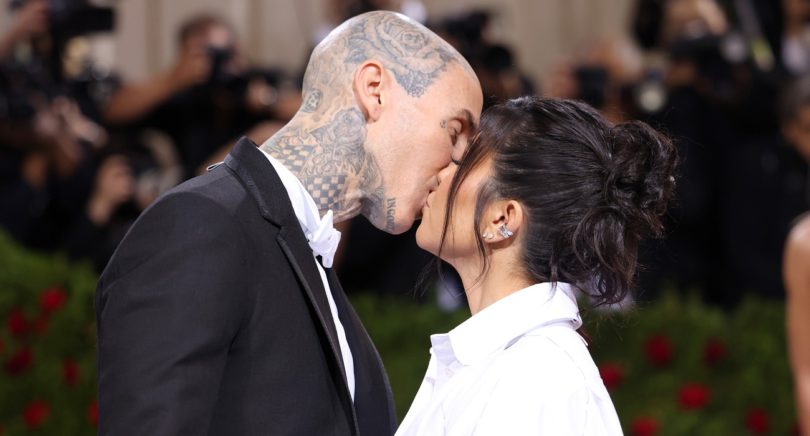 The Kardashians always find a way to make the headlines for different reasons. However, this time there is no scandalous news. The family is in the spotlight because of Kourtney Kardashian’s marriage to Travis Barker.

They had been dating for some time, and marriage rumors circulated the social media a few times. Of course, now the couple has officially tied the knot. Here’s everything you need to know about Kourtney Kardashian’s marriage with Travis Barker.

People find it difficult to plan one wedding because the event requires high effort. Despite that, Kourtney Kardashian has married Travis Barker thrice this year. Here are the details of each wedding:

The couple married in an unofficial ceremony in Las Vegas on 4th April 2022. They went to the chapel a few hours after the 64th Grammy Awards and exchanged their vows. However, the marriage wasn’t official because it wasn’t licensed.

As per the reports, the couple was still in their event outfits during the ceremony. The Kardashian sibling wore a black jumpsuit while Travis was dressed up in a suit. Kourtney has also reported that the marriage wasn’t licensed because of their odd timing.

On 15th May 2022, Kourtney and Travis released multiple pictures on their Instagram accounts revealing their marriage. The couple had an official ceremony at the Santa Barbara Courthouse. They also dressed up for the occasion and made sure their style game was top-notch.

Kourtney wore a mini white dress by Dolce & Gabba with a bustier top. The dress also had an embroidered red and gold heart on the center. She also coordinated the outfit by wearing a veil and red pumps. Meanwhile, Barker wore a full black suit with sunglasses. He also wore burgundy shoes to compliment his partner’s heels.

The couple planned to have a destination trip for their wedding after the official ceremony. This is why their Italy wedding was not a surprise for many. The event took place on 22nd May 2022 at the Italian Riviera coastline.

They exchanged vows at Dolce & Gabbana’s L’Ulivetta villa and held a reception at Castello Brown. Again, Kourtney wore a white corseted dress by Dolce and Gabbana. However, their veil was astonishing this time due to the hand-embroidered depiction of the Virgin Mary. Barker opted for a classic tuxedo.

Who Attended The Weddings?

Close family members and friends mainly attended the weddings. All the Kardashian siblings were present at the Italy event, and the Jenner siblings were there too. Kourtney’s children also attended the nuptials. Celebrities such as Megan Fox were also present.

Landon and Alabama (Barker’s children) also celebrated with the couple in Italy. The drummer’s stepdaughter was also there. It was a lavish event with a reception in a medieval castle.

This is all the information you need about Kourtney Kardashian and Travis Barker’s wedding. The couple married thrice within two months, and their marriage is officially licensed. You can check out the pictures on their Instagram accounts to view their outfits.