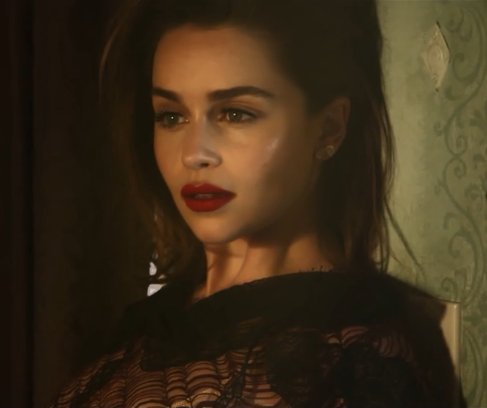 Emilia Clarke is known for going on red carpets, so having another premiere isn’t really new for her. What is new however is her look that she chose for the “Last Christmas” premiere, a movie that’s just launched. She is known for the fact that she tries to impress with her look. And in this case, she did not disappoint.

This time around she went with a plunging cutout and that really put things to the next level. She had a midi dress with sheer ruffled sleeves. That was combined with a wonderful high neck and some crystal embellishments. She also wore the minimal strappy heels from Cartier and Gianvito Rossi to create a pretty impressive, unique look.

On top of that, the hair was a ponytail with black ribbon at the end. It was a very interesting and creative look with some rather immersive and powerful ideas. The style and hair work itself was provided by Earl Simms, which is known to work with Emilia Clarke quite often.

Emilia Clarke was with her co-star Henry Golding, which also dressed very well for the occasion. He had green tartan trousers and a black velvet blazer. Definitely not overdressed, if anything it was amazing and really felt like something unique and different.

She came right after the backlash from the last Game of Thrones season and obviously it was quite the challenge for many writers and the cast. According to her, she appreciates everyone that followed the show and which was so genuinely interested to see the end.

Emilia Clarke also told many publications that people are backing her up, so it seems that she wasn’t really that happy with the way her character arc ended. At the end of the day, what really matters is how everything is approached and it’s safe to say that she enjoyed most of the arc.

But what matters is how people will go onward and what approach they will have in the long run. Emilia Clarke is definitely moving away from Game of Thrones and she has a lot of different projects ready to go. As a result, there’s no need to worry about her right now as there’s plenty of stuff for her to do in the near future. So we will see her soon in other movies, maybe even with some of her GoT co-stars.