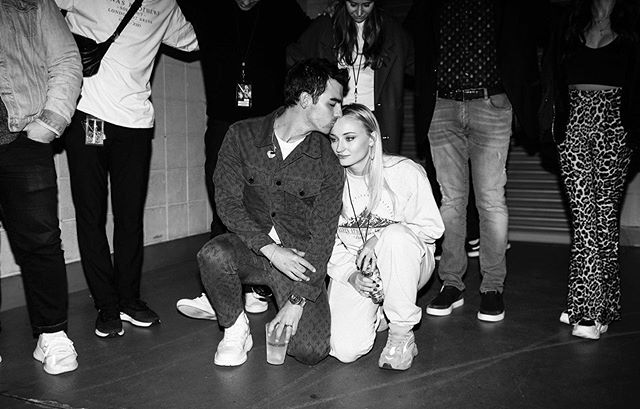 We all know Joe Jonas loves his tattoos. He has a great collection of them all over his body. So, it’s no big deal to see him donning a new one as of recent. But it has caught the eyes of many people as they believe they it looks as if it is for his beloved wife, Sophie Turner.

The tattoo was added to his neck by the infamous tattoo artist, Noah Lee. He is also known as NAL and has done a range of celebrity tattoos over the years of his work. Joe Jonas went on to share his new tattoo through his Instagram story and people are clearly excited to interpret the meaning attached to it.

So, before we go on to talking how whether this tattoo is for Sophie or not, let’s understand what it looks like. It takes on an intricate style of tattoo that is small enough to get done with under one sitting at the tattoo parlor.

Now, the tattoo looks something like a keyhole and a person peeking through it. People assume that the person that is in the tattoo looks like Sophie. How are people coming to this conclusion? Well, in the tattoo, a fraction of the person’s face is visible. So, this includes their mouth, jawline, and eye. Even with such little information, people are assuming that it can be none other than his wife.

The tattoo is of a black and white appearance at the back of his neck, and Joe Jonas is surely proud of his new tattoo. Maybe he wants people to try to understand what it means. Is that why he posted the picture on Instagram stories or he just wanted to show off his new tattoo?

Is The Tattoo Really For Sophie?

Now, the one thing that everyone wants to know about. Is the tattoo really for Sophie? Or does the tattoo look like Sophie? While many people think that this is an original tattoo that Joe Jonas created for himself and it is indeed Sophie Turner in the keyhole, others have another theory.

The other theory is that this tattoo is featuring the artistic ways of the famous Italian artist, Piero Fornasetti. He is known for his creativity and exceptional artistic skills. One of his paintings represents something similar to what Joe Jonas has on his neck.

Now, Joe Jonas also has three more tattoos that feature this artist’s style. So, the more plausible belief is that he took inspiration from yet another design of his to create this new tattoo on his neck. However, there’s one thing different in the tattoo.

The woman peeking through the keyhole looks exactly like Sophie Turner, leaving everyone to believe that it is her. The resemblance in the eyes and jawline is uncanny, so we are sure that it is for her only. This is perhaps the sweetest tattoo to add to his collection and will surely be a memorable one, for both of them.