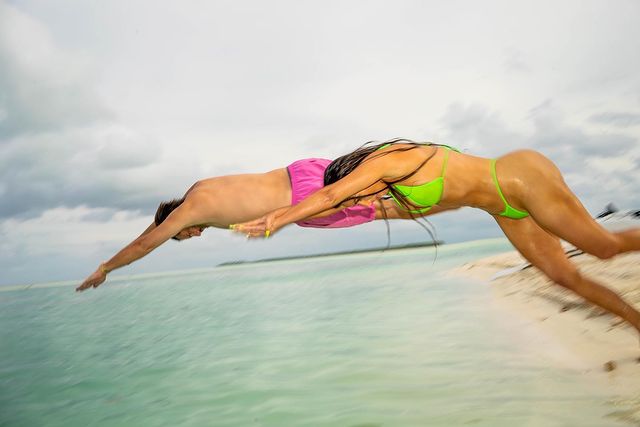 Kim celebrated her birthday on a posh secret island and did not escape the opportunity to show her seductive figure to subscribers on Instagram.

TV personality, businesswoman and American influencer, Kim Kardashian, who recently celebrated her anniversary, starred in a bikini, and the photos turned out to be very hot! Kim seems to be saying by them: “This is how you should look at 40!”

Kardashian posted the footage on Instagram and immediately began to collect likes and compliments.

The photographer did his best — he took pictures of the birthday girl from all sides. And no matter how you look at it, Kim looks good everywhere (can we do the same?).

Her stylish bow was complemented by a stylish Louis Vuitton bandana, which instantly became a trendy thing.

“This is 40!” — Kim signed the photo succinctly. The TV-show star celebrated her birthday on the Tahiti secret private island with family and friends. The star flew there on a private jet. Journalists could not determine on which island particularly the celebration was held.

This is definitely noticeable, that Kim has not taken such photos for a long time — so it was the breath of the fresh air for the entrepreneur’s fans. Probably due to quarantine and its restrictions, the star family now rarely flies to warm countries.

But now, the multi-million army of fans can rejoice, because the latest publications of the diva on Instagram are the real photo report of a luxurious vacation, where Kim celebrated her 40th birthday.

The KKW Beauty founder’s relatives answered her with an equally memorable gift. They recreated all of Kim's best parties from her entire life. Secretly, they brought the Kardashian to the house where everyone had gathered, while Kim thought that she was going to the next photo shoot. In the house, they set up screens that broadcast video from Kim’s children's birthday, filmed by her father, Robert. As a surprise, all family members recreated a dance that they loved to dance together when they were kids.

She was amazed to see all the videos from her past birthdays and repeat all the brightest celebrations.

To take her family and close friends to French Polynesia, and this is no less than almost 30 people, Kim rented an 88-seat Boeing 777 jet. As Kardashian reported on her social media, she tried to surprise her loved ones with this trip.

Fans of the TV-star criticized her for displaying a luxurious lifestyle during the pandemic crisis. Others scolded the Kardashians for not following safety rules.

“I understand that for most people this is still unattainable, so at such moments I humbly think about how privileged my life is,” Kardashian wrote on Instagram.

With such provocative remarks, Kanye West's wife has attracted an even greater amount of pretty ambiguous attention. However, the entire Kardashian family pays no attention to criticism and continues to publish pictures of a happy holiday, which worth several million dollars.