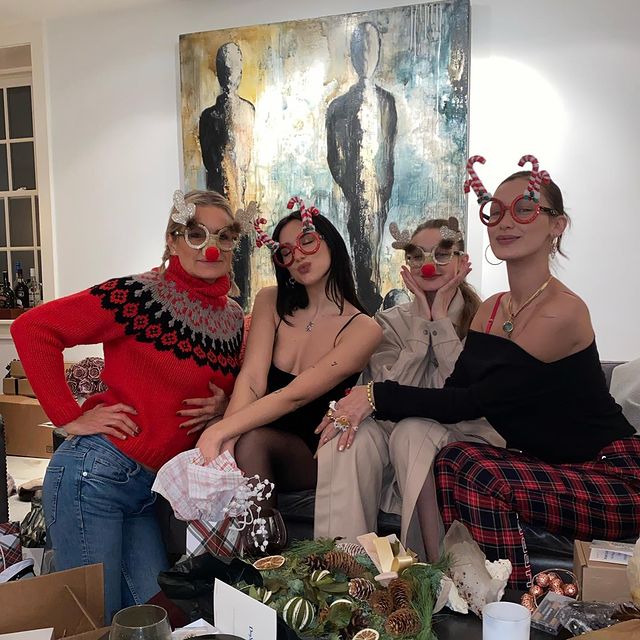 2020 was a vastly different year for everyone.  In March, we might have expected to be over with this virus by summertime.  As time went on though, we realized this was not going to be the case.

COVID 19 was with us during the holidays.  This is often a time where we plan to go see family, whether they live close by or far away.  Many travel thousands of miles and this year that was not possible.  We were not the only ones who felt it.

In 2019, the average person probably went to a family gathering and had a great time catching up with relatives who lived far away.  A celebrity might find several things to do on their Christmas day, including events and parties.  In 2020, things turned around.  Neither the average person, nor those who have a more public face could do what they normally would without considerable risk.  Because of this, many of us spent the holidays in the same way.

Perhaps you spent it in a way like the Hadid family.  We can see from social media that they had a lot of fun decorating gingerbread houses.  Dua Lipa’s Instagram also shows that everyone dressed up and donned some festive glasses.

Dua Lipa went public with her relationship with Anwar Hadid in November of 2019 by making their red-carpet debut at the AMAs.  Since then, Dua Lipa has been photographed with Anwar Hadid’s sisters, Gigi Hadid and Bella Hadid, several times.  It is clear that she and the Hadid family have become a close group.

Lipa’s hits include songs like “Physical”, “Don’t Start now”, and “Levitating”.  The later of the two were performed on the last show of 2020 for Saturday Night Live.

“It was such an honor to be invited back to the SNL stage for their last show of 2020.” Lipa Wrote.  “Felt so lucky to be rounding off my year with these performances and for SNL to have had me on for a skit too!! Watching everyone work and the magic behind it will be something I will never forget. Kristen Wiig and the whole cast were so cool and I’m still floating from all the energy.”

So, how did you spend your holiday season?  We may have had to keep our gathering small but some traditions, like gingerbread houses and festive glasses, can exist in any small group.

Many people took delight in zooming with their family members to at least catch up after such a crazy year.  Many enjoyed a great Christmas dinner, with a few more leftovers than usual.

Others sat down and watched their favorite Christmas movie (Home Alone anyone?).  Even with such a different world, there are many different ways we can enjoy the holiday season.