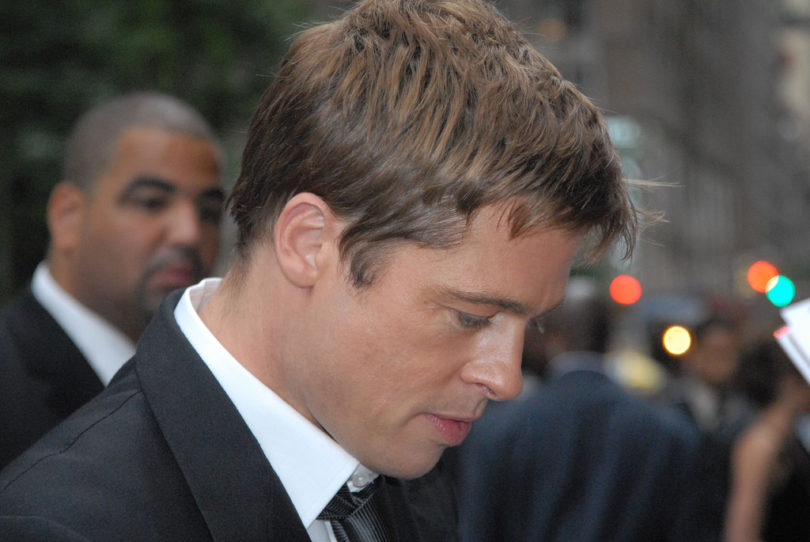 The Sunday Service held by Kanye West recently was not void of the presence of many personalities. Amongst all of the ‘Guest appearances,’ Brad Pitt’s was entirely unexpected!

It isn’t the first time celebrities will attend these Sunday Services, but onlookers were surprised at seeing the sensational actor, who wore a charcoal-colored cap that morning. It is no news that the rapper has been pivoting to preach of recent, and helms an astounding choir. On the 1st of September, 2019 (which was a Sunday), the renowned American actor and Film Producer was present at one of the rapper’s Sunday Services. Kanye West hosted this particular Service in Watts, California.

The A-list actor’s attendance was spontaneous, according to Reports. TMZ reveals that Brad was seen in a parking lot of a church where a crowd of a large group of worshippers surrounded Kanye and his choir. According to TMZ, it was a ‘spur-of-the-moment deal,’ and everyone- the crowd of people that were present as well as those that weren’t- were surprised at Brad’s attendance. While this was as unexpected as it could have been, sources revealed that this wasn’t the first time Brad was attending Kanye’s Sunday Services. Brad Pitt had once been in one of the Sunday Services, so this was the second time.

Amidst the crowd of people and celebrities present were Kim Kardashian( Kanye West’s wife), L.A. Reid, Adrienne Bailon, Khloe, Kourtney, and Kendall Kardashian. An anonymous person informed Entertainment Tonight that the star was “just amazed by the atmosphere and love” and “made sure to take as many pictures with everyone who asked.” According to a website, Kanye’ jammed with the choir’, and Brad’ enjoyed the music.’ Fans that were at the Sunday Service let the actor who is finalizing his divorce with Angelina Jolie enjoy the Service. The unnamed individual that spoke with Entertainment Tonight additionally mentioned, “Kanye didn’t say too much, but shook hands and greeted everyone who came out”.

Some days before the Sunday Service held, Pitt was promoting his new movie “Ad Astra” at the Venice Film Festival in Venice. Kim Kardashian took to Twitter to share a short clip of the Service. The media personality wrote ‘Sunday Service in Watts,’ uploading a short clip of  West and his choir performing a religious rendition of 2Pac’s classic “California Love”.

Kanye brought a mix of hip hop and Spiritual, and the crowd loved it, and the Once Upon a Time in Hollywood actor did too. Pictures on social media show Brad and Kanye chatting it up with big contagious smiles. Before this recent Sunday Service, the last Sunday Service held in Dayton, Ohio, with Kanye, Kim, and their children, North, Saint and Chicago West. The purpose of this was to soothe the community, after the mass shooting that took place there on the 4th of August, which left nine (9) people dead and twenty-seven (27) injured. Also, Kanye had his choir sing a unique ‘happy birthday’ rendition for Dave Chappelle, which went viral. The rapper’s religious album ‘Jesus is King’ should debut later this month.