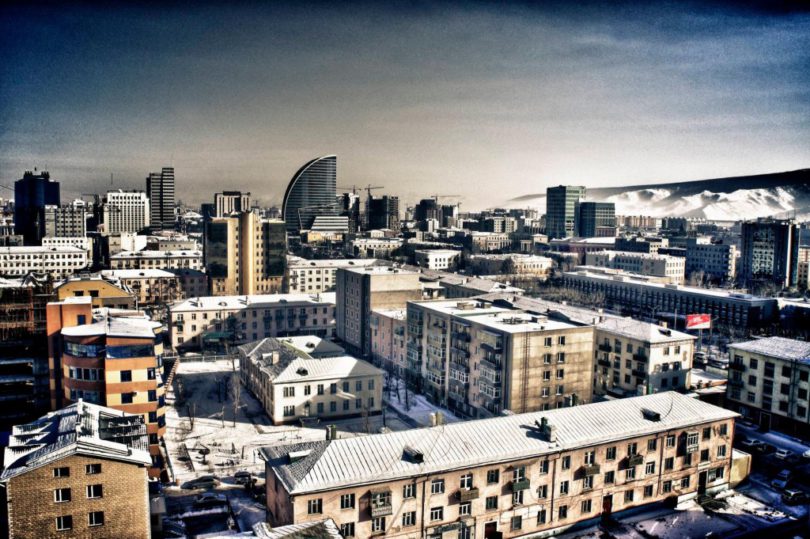 Astana, the capital city of Kazakhstan, appears over the horizon like a mirage. For about 1200 kilometers in all directions, the land is basically a flat, empty stretch of grassland, with only a few little towns sprinkled here and there. Then, shooting up from this vast emptiness is a large cluster of modern structures. The latest addition to this cluster is the Khan Shatyr, a huge shopping mall that also acts like the world’s largest tent.

Other modern architectural marvels include the Palace of Peace and Reconciliation, which is a glass pyramid 60 meters tall, the Central Concert Hall, which looks like a giant budding flower from above, a presidential palace that looks very much like the U.S. White House, a circus building resembling a flying saucer, and Baiterek, a tower 100 meters tall that could pass for a giant lollipop.

All of this was accomplished in just 15 years. Before that, the few houses occupying the land could not be called a city. It was no more than an empty patch of land known mainly as the home of the former gulag prison camp build to house the wives of Soviet traitors.

Winter starts around mid December and lasts until about March.

The hardy people living in the northernmost US city of Barrow, Alaska are so close to the North Pole that they live in darkness from November to January.

This harsh, dark city might seem uninhabitable for most people, but for the nearly 5,000 residents, this is home. No roads lead to Barrow. The only way to reach the city is by plane or boat. Residents fight the bitter cold by keeping physically active working in the demanding jobs of the local energy industry. As you can imagine, with such extremely cold temperatures and no sunshine to help warm or light the place up for 65 days a year, keeping the energy supplies up and running is vital.

The weather during the winter months can be terribly dangerous because of the strong winds and extremely cold temperatures. The summer months aren’t much better with only about 120 days of temperatures barely above freezing. In fact, it’s not at all uncommon to see snowfall and sub zero temperatures on any day of the year, even in the middle of July.

Fort Good Hope is so far from civilization that during the winter, the only way to reach the city is by plane. During the extremely short summer, this remote area can be accessed by boat along the Mackenzie River. Odd as it may seem, the region is quite lovely in the summer months. The weather is warm and sunny, with luscious green growth all around that attracts visitors from around the world. Of course, the Aurora Borealis is quite an attraction, as well.

In spite of the sub zero temperatures, Inuit and Métis tribes have lived here for centuries, and many of them still refer to the city by its traditional name Radili Ko, which roughly translated means “rapids.” Established as a city in 1805, Fort Hope became the first settled area in the Lower Mackenzie Valley. Today, many of the residents still rely on hunting and fishing as a means of earning a living.

Fort Vermilion is located in the northern part of Alberta, Canada. Europeans first came to the area sometime in the 1700s, and it has been populated ever since. In spite of being way out in the boonies, the city hasn’t sat idle. The residents have developed a thriving community of modern buildings, skating rinks and very popular dance hall where the locals let their hair down and enjoy heart pumping fun.

Fort Vermilion is a unique blend of historical sites that have been around for centuries, and modern conveniences complete with a hot night life that keeps residents busy during the long cold winters. The climate is categorized as subarctic, with very short summers and winter temperatures averaging around −40 °C (−40.0 °F). Although the summer is short, the northern location makes for extremely long daylight hours. This is the perfect breeding ground for mosquitoes.

Freezing cold winters and summers filled with billions of mosquitoes – doesn’t sound like a very pleasant place to visit, never mind wanting to live there! But, for some reasons the locals don’t seem to mind.

The abundant wildlife doesn’t mind the harsh conditions, either. The area is known for large populations of deer, moose, bears, beavers, coyotes, foxes and Canada geese.

The frosty city of Harbin, China is located in the far reaches of the northeast section of China. The subzero winter temperatures have earned the city the very appropriate nickname “Ice City.” However, these super cold temperatures haven’t limited the growth of Harbin one bit. It boasts a population of more than ten million residents. Influences from Japan, Europe, Russia and other parts of China are evident in the culture and the fantastic architectural structures all over the city.

Harbin celebrates its status as one of the coldest cities in the world with their famous “Harbin International Ice and Snow Festival.” Tourists come from all over the world to view the remarkable ice sculptures and participate in a variety of exciting winter activities.

The city gets its name from an old Manchu word meaning “a place for drying fishing nets.” What started out a small hamlet in 1898 has grown into one of the largest cities in China.

When people think about Hell, a small frozen city in Norway is not usually what they have in mind. You can bet the brunt of many jokes around here revolve around “when Hell freezes over” which is exactly what this town does for a good part of the year. In fact, temperatures are around freezing for about one third of the year. Local residents keep themselves busy during the winter entertaining the hordes of tourists fascinated by a frozen city named Hell.

The name originates from the Old Norse word hellir, which translates to “overhang” (not hangover) or “cliff cave.” In modern Norwegian a similar sounding word is commonly used, which means “luck.” The Norwegian word for Hell, the fire and brimstone Hell as we know it in the English language, is helvete.

English-speaking tourists really get a kick out of sending friends and family members postcards with a picture of the snow covered station and frozen ground, visually making a joke about “When Hell freezes over.”

Temperatures in International Falls, Minnesota drop lower than any other part of the United States. The local residents love, and even embrace the frigid winters. They fill the long cold days with activities like snowmobiling, snowshoeing, skating and ice fishing. They say that if you bundle up and keep active, the cold weather should not stop you from getting out and having fun.

Unlike the other coldest cities in the world, International Falls is not located way up near the Arctic Circle. It is basically in the center of North America. The climate is categorized as humid continental, with long, bitter cold winters and warm humid summers. January temperature average −16.3 °C (2.7 °F), and often drop down to −18 °C (0 °F) about 60 nights a year.

Snow cover is quite thick and freezing temperatures generally last from mid September to the end of May. Spring and autumn are short and mild. July is the hottest month with averages around 18.4 °C (65.2 °F).

Oymyakon is the coldest inhabited city in the world. It is located in the Sakha Republic in northern Russia. February 6, 1933 was the coldest day on record with a temperature of −67.7 °C (−90 °F). On average, winter temperatures are around −50 °C (−59 °F). You might think these frigid digits would keep locals locked up tight indoors, but you would be wrong. The people living here love to take a dip the glorious nearby hot spring.

Winter in Oymyakon starts early and hangs in for a good five to six months. In fact, the city has never recorded temperatures above freezing from the end of October to nearly the end of March. This doesn’t leave much time for summer, however when summer does finally arrive, temperatures average around 30 °C (86 °F) or more.

The city has been featured in several documentaries – The Winter’s Tale from the Savage Skies series; Siberia from the Dangerous Roads series; Going to Extremes by geographer Nick Middleton; Dangerman which was created for the Discovery Channel and Hot and Cold from the Extreme World series.

Other documentaries include the Chilling Out episode on 60 Minutes; and Russia: The Bull of Winter from the Departures series.

Ulaanbaatar is the capital city of Mongolia. It has a population of over 1.3 million residents. These people must love the cold, because it sure gets nippy up here. In spite of the long, dark winters, there is evidence that this area has been inhabited for many centuries.

The unique citizens of the city have found interesting ways of battling the cold by filling their days with reading and learning. Ulaanbaatar is the only city in the country with a university and it is home to a fantastic library filled with ancient Mongolian, Chinese and Tibetan manuscripts. The city sits high above sea level in the northern part of the country. Ulaanbaatar has the longest and coldest winters of all capital cities in the world. It is the business and cultural center of Mongolia, and a major connecting hub for the Trans-Siberian Railway and the Chinese rail system.

The city is one of the biggest urban centers to thrive in such a remote location. The Gandan Monastery is one of the few buildings in Ulaanbaatar built before WWII and one of a handful of monasteries to live through the Soviet purge.

Verkhoyansk was founded by the Cossacks in 1638 as an ostrog (a fortress). In 1775, the town was moved to its current location on the left bank of the Yana River. For hundreds of years the city was used as a place of exile for undesirables. Prominent people exiled to the city included Bolshevik revolutionaries Viktor Nogin and Ivan Babushkin, and Wacław Sieroszewski, a Polish writer.

Aside from extremely cold temperatures, Verkhoyansk is also well known for extraordinarily large wolf populations. It is believed that about 3,500 wolves live in the area. In January 2012, the city was attacked by a pack of approximately 400 wolves that moved into the area because of a shortage of natural food sources, blue hares in particular.

That same year, the wolves reportedly killed more than 16,000 reindeer and over 300 horses.

You might imagine Yakutsk as a village of snow caves and igloos, but in fact it is a booming city of over 260,000 residents, with a cultural hub similar to any other modern Eurasian city. The only difference is the extremely cold temperatures. To escape the cold, residents spend much of the winter months enjoying indoor activities such visiting museums, going to the theater or dining in one of the fabulous restaurants.

Yakutsk is located about 450 km (279.6 miles) south of the Arctic Circle. It was founded as an ostrog (fortress) in 1632, but didn’t grow into a city until the around the 1880s when large reserves of precious metals such as gold were discovered in the area. During the industrial revolution, under the rule of Stalin, these reserves were developed extensively.

Not even the locals venture outdoors in these conditions!