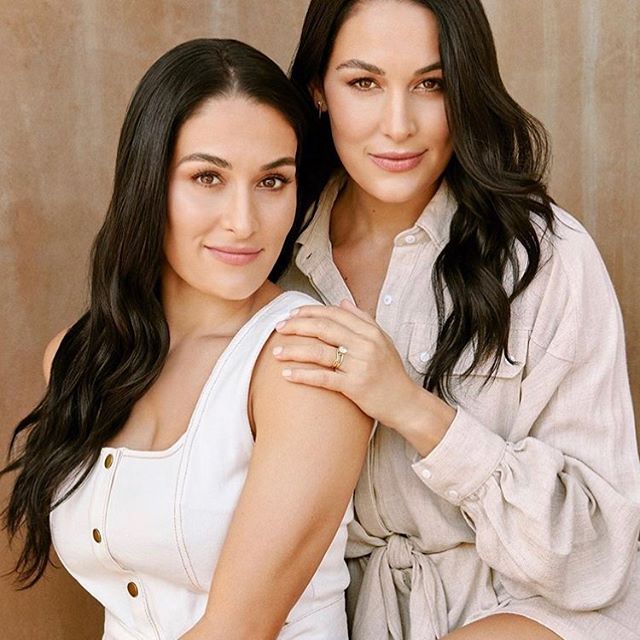 Turns out it pays to be a Total Bella. The reality TV show, Total Bellas, is a spin-off of Total Divas. It takes a look inside the lives of twin sisters and former WWE wrestlers, Brie and Nikki Bella and their families. The two were born into the Garcia-Colace family. Bella is their wrestling name. WWE star John Cena was a major part of the show, since he was formerly engaged to Nikki. Other family members and relationships include Maya Laurinaitis, John Laurinaitis, Kathy Laurinaitis, Lauren Lola Garcia, JJ Garcia, Bryan Danielson, and Artem Chigvintsev.

Nikki and Brie are said to be worth $6 Million each. Off-camera of the reality show, the two have also made other on-screen appearances. The two also own and operate Birdiebee which is an athleisure clothing line, Belle Radici wine, and Nicole + Brizee beauty products.

Artem Chigvintsev, Nikki’s fiance and father to her soon-to-be-born son, is worth $2 Million. This is no doubt largely due to his professional dancing as seen on Dancing With the Stars.

Bryan Danielson, know in in the WWE as Daniel Bryan, is married to Brie and individually worth about $8 Million

JJ Garcia is the twins’ brother. He has a net worth of between $1 to $5 million. Lauren Lola Garcia, who married JJ in 2011 and share two daughters, is worth between $1 to $5 Million. She not only appears on Total Bellas but also runs a lifestyle blog entitled What Lola Likes.

Mom Kathy Laurinaitis, who remarried after the split from the twins’ biological father, is estimated to be worth $2 Million. In addition to appearing on Total Bellas, she also owns a recruiting company business, JBN Associates, LLC which contributes to her total worth. John Laurinaitis is the stepfather to the twins. He is said to be worth up to $5 Million stemming from his work in the WWE where he appeared as Johnny Ace.

Maya Laurinaitis is the stepsister of the twins. She pulls in an estimated $3 Million in net worth. She dipped her toe in an attempt at entering the WWE but opted instead for a modeling career.

If you add in John Cena’s net worth, the total net worth of the show grows immensely. He was featured on the show in the first three seasons. Cena is said to be worth more than $60 Million. He earned most of this as the highest-paid wrestler in the WWE. He has also starred in movie roles.

Going forward, it looks as if their worth will only grow. Nikki announced that she and fiance Artem are expecting a baby boy. Brie and husband Daniel are expecting her second baby with a very close due date to sister Nikki’s. The twins have been making their joint pregnancies part of the show which is sure to garner an even larger audience once the births are aired.