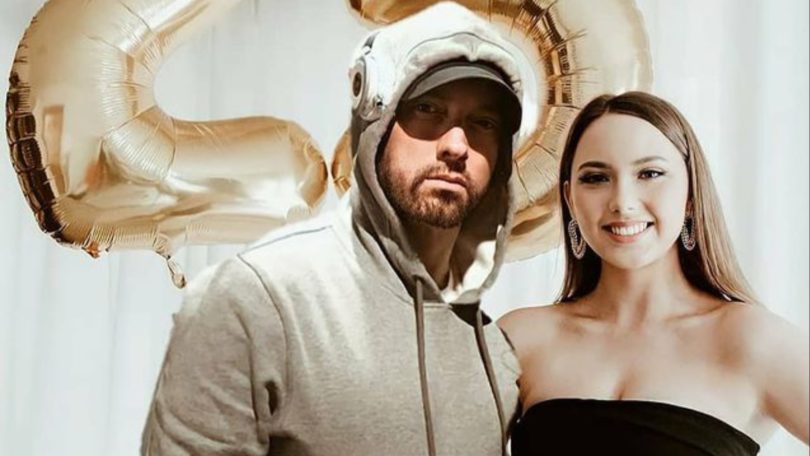 Hailie Jade Scott, sometimes referred to as Hailie Jade Scott Mathers, is all grown up and making her own waves. You probably know her best as the 90s rapper Eminem’s daughter. Eminem’s real name is Marshall Bruce Mathers. His daughter is proving to be a lot more than how she was described in her dad’s lyrics of Hailie’s Song. Though, this is not the only song that speaks of Hailie. She is, in fact, mentioned in more than 20 of her famous father’s songs.

Eminem recalled his daughter in over 20 songs such as Hailies Song, My Dad’s Gone Crazy, Kim, 97 Bonnie & Clyde, Beautiful and My Darling to name a few. She also appeared in her dad’s music video for the song Mockingbird that was released in 1999 when she was quite young.

Hailie celebrated her 25th birthday recently. When Eminem was recently interviewed by Mike Tyson, he said he was very proud of his daughter. He also revealed details that she graduated from university in 2018 and that she has no children yet, but she has a boyfriend. He also noticed that he is very happy that he has a daughter.

The little girl that fans watched grow up in her dad’s shadow is now a social media influencer on Instagram where she loves sharing pictures of everyday happenings in her life. She joined Instagram in October 2016 and now has close to 2 million followers. Some fans have pointed out how much she looks like her famous father. Though, she is much more interested in the beauty world and fashion than she is in carrying on the legacy of her dad’s style of music.

Hailie is the middle child of Eminem’s three children and his only biological daughter. She describes her relationship with her dad as being “very close”. Her mother, Kimberly Anne Scott, and her dad have divorced twice. Hailie shares two half-sisters who are the daughters of her mom. They include Whitney Scott Mathers who is her mom’s daughter from a previous relationship, and Alaina Marie Mathers who is Kim’s late sister’s daughter. Eminem had adopted both.

Hailie was born to Kimberly and Eminem in 1995. The pair had been high school sweethearts and did not marry until 1999. They would later divorce in 2001 and Hailie became part of a heated custody battle. In spite of the brutal battle of custody, the two reconciled and remarried in 2006 only to divorce again less than 3 months later.

Usually, Hailie doesn’t mention her famous father on Instagram. Most of her posts feature self portraits, her two furry friends, and things to do with fashion or fitness. She has also featured pictures of her with boyfriend Evan McClintock. The two have been dating for several years after meeting at Michigan State University. Hailie graduated in 2018 with a degree in psychology.

Hailie posts pictures to her Instagram account as an influencer at @hailiejade. She managed to stay out of the limelight until 2017 when her social media account went viral.